Over the course of this interview we’ll be talking about the conception and development of Evolution: Dragon, the sound design and sampling work that went into it and will gather some pro tips on how to improve your very own sound designing skills.

EPICOMPOSER: Evgeny, thank you for taking some time to do this interview for Epicomposer! Please tell us a bit about yourself and how you came up with founding your own sample library brand Keepforest.

EE: Thank you for inviting me, Martin. I am 25 years old and live in the south of Russia. I have a diploma in mathematics and programming. There were times when I was in a team of professional mathematicians for a while, about a year and a half. I’ve got a good experience in acoustics, continuum mechanics and applied mathematics. In my opinion, it’s weird, I still can’t figure out what I like more – programming or making a music.

My first experiments with sampling began 2 years ago, I guess. ‘Atmosphere‘ was the first commercially available sample library I released in early 2015 under the label of Wavelet Theory. It’s a product for making atmospheric post-rock and ambient music.

Arseni (Editor’s note: Arseni Khodin, co-founder of Keepforest) and I know each other for a long time already. The idea of creating a library like our first, Evolution: Dragon, came quite unexpected, as this is often the case. Everything happened quickly and spontaneously from the very onset of our endeavor.

By the way, we have just released our first and free update for Evolution: Dragon with new features and over 130 MB of new samples.

EPICOMPOSER: In your own words, please describe to our readers, what your first sample library Dragon: Evolution is about, who it aims at and how you came up with the idea
to create such an interesting sound effects sample collection.

EE: Evolution: Dragon is designed as a cinematic sound effects toolkit perfectly suited for composers and sound designers who create sound for trailers, TV and video games. Honestly, we didn’t spend too much time thinking over the idea of our library because we are trailer & film composers ourselves and we know what tools and instruments a modern composer needs and may be missing.

EPICOMPOSER: How did the production process for Evolution: Dragon look like?

EE: We really had a great team of professionals working on Evolution: Dragon. First of all, I would like to mention our graphic designers who are real masters. Arseni did about 85% of the actual audio content. I provided the remaining 15 percent of samples, but as a programmer, my main task was creating an appropriate Kontakt engine that would house the sounds nicely and allow the user to customize them with ease. Sampling-wise, I created some ambient pads, recorded/designed the piano and all the playable guitars from Evolution’s “Tonal” folder.

EPICOMPOSER: It seems like you put much effort in the design of your sample library’s interface. In fact, with the lurking dragon eye in the center, this is surely one of the visually most appealing interfaces I saw this year. How did you come up with the idea for a fantasy-themed interface and what where your main goals when designing it?

EE: To be honest, I didn’t plan to focus so much on the design and look of our interface in the first place but Arseni changed my mind. What do I say, it seems that he was totally right! A good interface is an absolutely crucial part of a library. So all in all, I have to give it to Arseni because the interface was his idea and achievement. 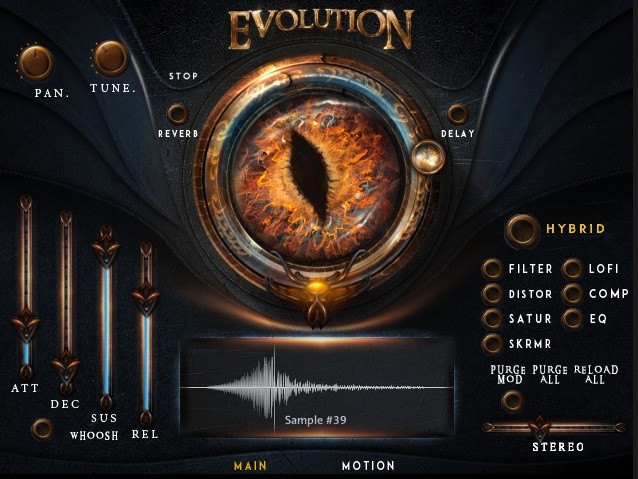 We had two goals: the interface should be convenient and user-friendly, which is an absolute necessity nowadays. Also, it should look really impressing and invite the user to get creative.

EPICOMPOSER: How long did it take to assemble all the sounds and samples needed for the library?

EE: I guess it took us about half a year, considering that we had to put all our other projects on the back-burner and really focused on developing our library.

EPICOMPOSER: What were the challenges – or maybe even difficulties – you had to face when producing the library?

EE: Frankly speaking, we hit a lot of roadblocks on our way. In the beginning we used to think that creating such a library was a much easier process. Well, I think we paid our dues 🙂 We knew how to record and design all the sounds. I knew how to code our engine. But still, there were plenty of pitfalls you have to watch out for creating a usable sample library. For instance, we had a lot of issues with KSP (Editor’s note: KSP = ‘Kontakt Scripting Processor’). It doesn’t even have real mathematics or a log function in Kontakt 5.5. What if I want to describe a non-linear discrete window function?. There is a lot of exhausting routine work in the process of creating Kontakt Libraries. Really hard work. But seeing the end result, it’s all worth it, I suppose!

EPICOMPOSER: How did you know which sounds you wanted to go for? Did you guys do some research on current motion picture advertising campaigns or did you let your experience guide you?

EE: It really was mostly our experience in creating sound and music for trailers and films that guided us and told us what a modern composer might need to achieve quick and professional sounding results.

EPICOMPOSER: Without spoiling anything secret, what did your source sounds for creating – say – the impact sounds come from? Do these derive from processed natural recordings or are they mostly generated digitally?

EE: They derive from both, natural and synthesized sounds.

It might be a bit controversal, but as I think, source material is not really the key. A sound designer can get cool sounds from almost everything using creativity, technical knowledge and good recording gear. We love to use piezo-elements for example to receive unusual and direct sounds.

The first thing we did was to create a list of the sounds we would need. Seriously, you can get good sounds from a washing machine or the creaking of a bed frame. Not kidding! Just look at this great tutorial video from one of our friends, Artem Rolar:

EPICOMPOSER: Continuing with a somewhat technical question: What does your studio setup look like and what gear was involved in creating Evolution: Dragon?

EE: Nothing too fancy, really! I use Reaper as a DAW, a Focusrite Saffire Pro 40 as an interface as well as Genelec 8010’s and Adams A7X’s for monitoring. For recording, I am using mostly Zoom handheld recorders with Sennheiser microphones.

EPICOMPOSER: What are your go-to plugins for processing and modulating sound effects?

EE: Some of my favorite plugins include products from D16, Waves, Sound Toys, Native Instruments and Xfer. I also tend to use a lot of Ableton’s and Reaper’s stock plugins. A plugin, I fell in love with recently is going under the strange name of DtBlkFx, developed by Darrell Barrell. It’s a freeware, Fast-Fourier-Transform (FFT) based multi effect plug-in you can do all sorts of amazing stuff with.

EPICOMPOSER: Could you share with us your N°1 tip for creating custom sound effects?

EE: Layering is your weapon. Learn how to layer your sounds. It’s as simple as that.

Do your research, read articles, learn from others. For example, I searched dozens of guitar forums to understand what gear “Hammock” uses to create their deep and atmospheric sounds.

Another thing that often gets underestimated is that a good custom sound starts in your head. As a sound designer, you should understand what type of sound material you need in the first place, even before starting to fiddle with it. Being able to work like this is particularly essential, when the deadline is coming and you simply don’t have time for experiments or curiosity.

EPICOMPOSER: The name of your first product, Evolution: Dragon, kind of suggests that this first library could be part of a series of products. Will we see a sequel or a possible Evolution-branded series?

EE: Yes, I hope the next chapter of our Evolution series will be released in 2017 🙂

That’s it for now! Again, thank you for doing this interview with me for Epicomposer! I wish you all the best with Keepforest and hope to see more stuff from you guys in the future. Goodbye!

0 comments on “Interview With Evgeny Emelyanov From Keepforest”