With Project Chaos, British sample library developer HybridTwo launches their third and latest installment in their range of cutting-edge cinematic sound design products. Aimed mainly at film, game and trailer music composers, Project Chaos offers a wide spectrum of percussion loops, cinematic effects, textures, drones and synth sequences, all powered by a capable engine that puts customization at the top of the list. After the success of Project Alpha and Bravo whose sounds can be heard in countless movie trailers and video games, Project Chaos changes the game’s rules by offering an entirely user-expandable product which allows you to import and process your very own samples.

We spent some time with Project Chaos and found out for you what the library and its manifold customization options have in store for a working composer on a tight deadline.

Project Chaos is a sample library powered by Native Instruments’ full version of KONTAKT 5.8.1 and above and was created by renowned composer and sound designer Daniel James (Terminator Genesys, Metal Gear Solid V) and his partner in crime Aaron Frensley. Here are some of the product’s most important features at a glance:

Project Chaos is a multi-layer sample engine that allows you to select from a wide range of cinematic loops, sequences and effects. These can be stacked and played back in up to four layers simultaneously, similar to libraries like Heavyocity‘s Gravity or Wide Blue Sound’s Eclipse. Each of the four layers can be accessed and controlled individually which enables you to create just the perfect blend of sounds for your needs. Also, you’re able to route each layer to its own designated output in KONTAKT, which makes it easy to create stems in your DAW or to further process each layer outside of the sampler. 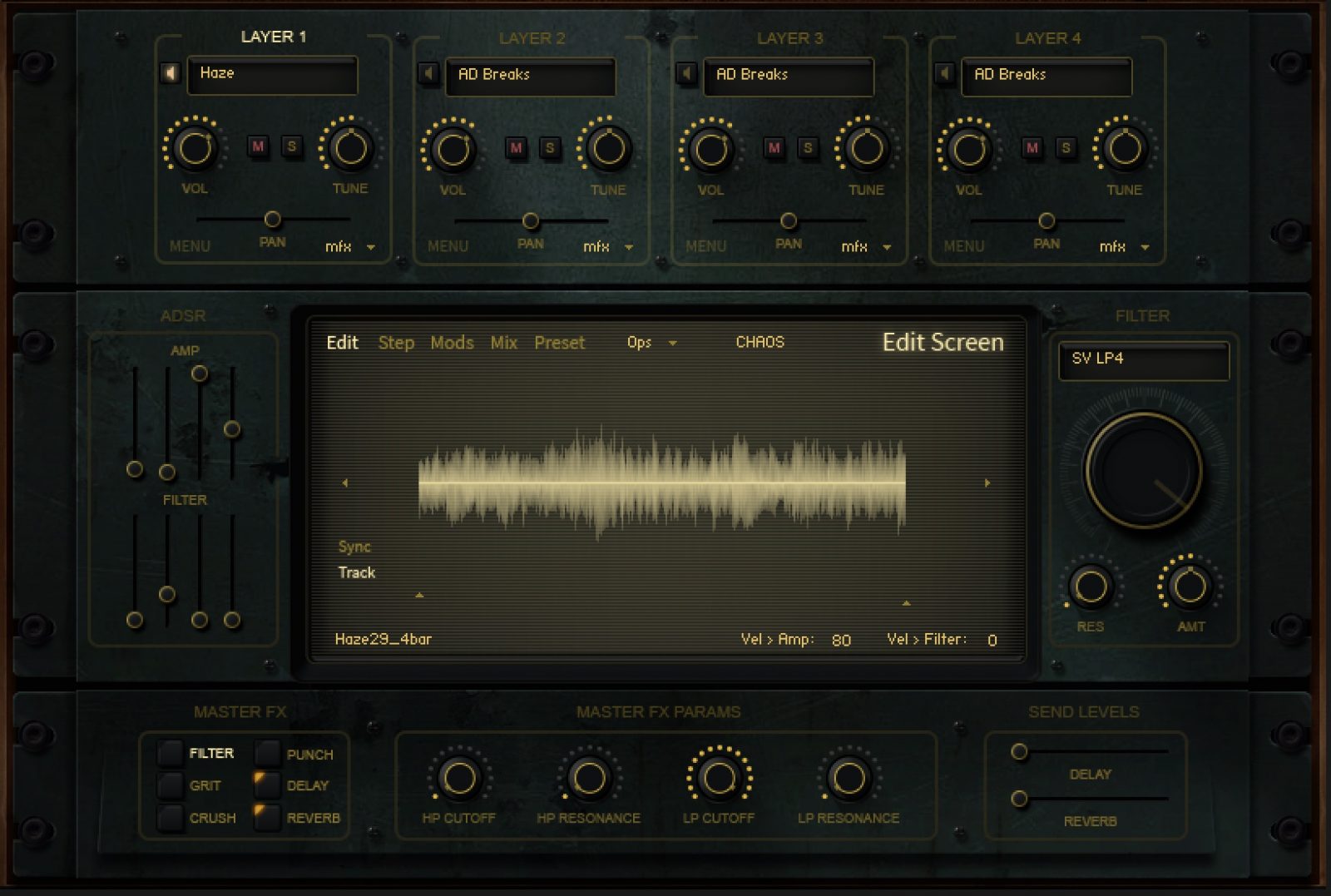 At the heart of Project Chaos lies the instrument’s comprehensive pool of masterfully crafted samples, sorted into 24 different sound categories. While some categories are labeled pretty clearly, some of them have a somewhat more cryptic name that unfolds its meaning very quickly as soon as you start browsing through the sounds inside. In Project Chaos you will not only find your mandatory set of powerful trailer FX like Hits, Whooshes, Risers and Sub Downers but you’re also presented with all sorts of percussive rhythms, gritty analog synth sounds, vast cinematic textures and distorted bits. 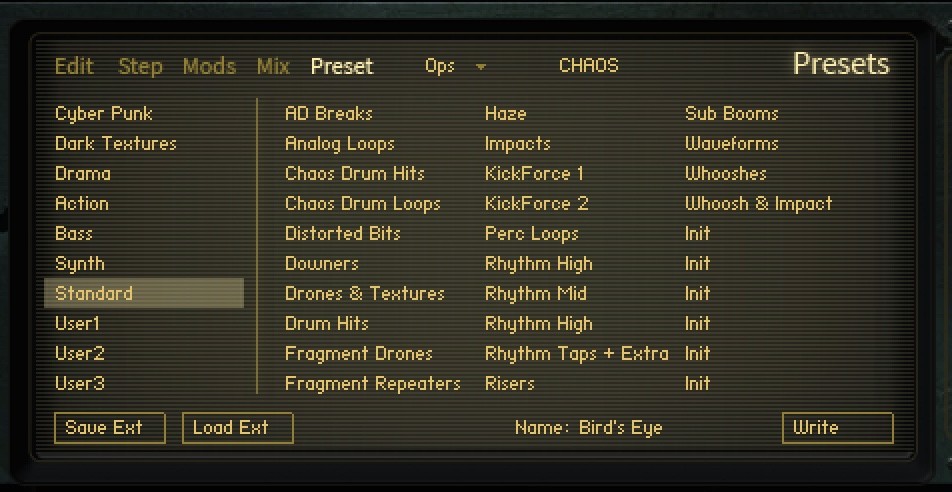 A sound category contains up to 32 samples which you can trigger via your MIDI keyboard. Each layer can be operated in two different modes, the Solo Mode and Menu Mode. While the Solo Mode takes one sample and spreads it across the whole keyboard range, the Menu Mode puts every available sample in the category on its own key. This makes the first option a useful tool for playing tonal samples and the latter one a quick and easy way to audition different sounds and change their pitch by using the respective keyswitches. Since you can load up to 32 samples per layer, you’re given over 1,000,000 possible combinations of sounds just for one patch – this should have most people covered for some time!

The UI’s middle section is where you can browse through samples, banks and presets but is also the main hub for most modulation and mixing duties. In addition to a per-layer ADSR envelope shaper on the left and a multi-mode filter on the right, you will find the Sample Edit Screen, Step Sequencer, Modulators and the Mixing tab. Aside from the Step Sequencer, Modulators and the Mixing tab, all other functions are available for every layer, so you can shape the envelope, use the filter and modulate the sound of each sample layer individually.

Both the Step Sequencer and the four different Modulators are quite elaborate tools that offer extensive options for the animation of samples and the creation of vivid and ever-evolving sounds. While the Step Sequencer offers all the standard features you would expect from such a tool like step selection, control over step length, rate and order, Project Chaos goes one step further: For each step you have control over four additional Sub Sequences which allow you to meticulously adjust the pitch, volume, pan and start point of every step. 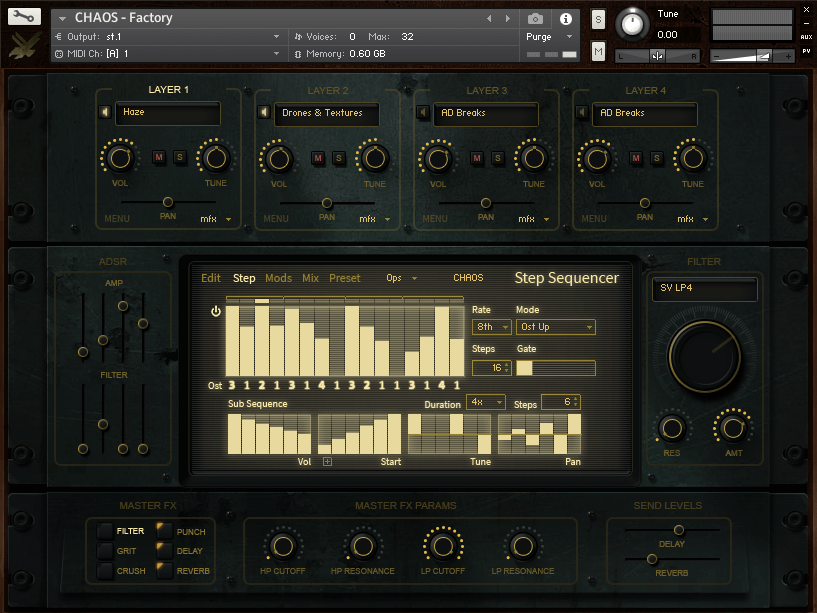 The Modulator tab gives control over a set of again four modulators – two LFOs and two Sequencers. Both modulators enable you to change various parameters of each layer over time. Mostly used for gradually opening and closing the cutoff filters or modulating the pitch, panning and volume of samples, Project Chaos’ engine also offers control over various FX parameters. Also, the four available modulators are able to interact with each other, like for example having one of the sequencers modulating LFO 1’s amp parameter. As you can probably tell by now, the processing possibilities are almost endless. However we are going to learn that there’s even more room for customization once we get to the Chaos Banks and User Expandability a bit later.

For now, let’s close our GUI overview with some last feature’s not mentioned so far. Still on the Edit Screen, you can find the Mixing tab from which you can adjust the tone and dynamics of the individual layers. For these purposes, you have access to both a 2-band EQ and a compressor for every layer. Located at the bottom left of the interface, there is a collection of 6 Master FX that affect the sound of all four layers. These global effects include a filter, distortion unit, bitcrusher, transient designer as well as a reverb and delay. Both the delay and reverb are laid out as send effects.

In terms of structure, Project Chaos is built around the concept of Banks, which are essentially self contained versions of the library, each with their own set of samples, sample categories and presets. Project Chaos comes with a collection of 7 banks including an initialized Factory bank as well as six banks that are pre-designed with a certain genre or application in mind (Action, Drama, Dark Textures, Synth, etc.). These preconfigured sample banks and their presets sound amazing throughout the whole range. Quite often, you will find presets that could build the entire foundation of a cue as most of them make use of multiple layers and modulation options. Each bank can store up to 32 categories and 300 presets, so again, there’s a lot of material to discover.

Probably one of the most groundbreaking features of Project Chaos is its open sample structure, which makes it possible for users to import their very own samples and to create custom Chaos Banks. By making use of Project Chaos’ own Bank Manager app (for Mac & PC), you’re able to conveniently import sounds and build complete banks.

Each bank you create has the capability to store up to 300 presets on the UI itself, but you can also save external presets. It is recommended to create a separate preset folder for each of your banks somewhere on your hard drive in which to store external presets, as presets created in one Bank will not necessarily be usable in another.

THE SOUND OF PROJECT CHAOS

The factory sample material in Project Chaos sounds amazingly powerful, punchy and dynamic throughout all the categories. You’re presented with such a broad spectrum of interesting sounds that it takes quite a while to listen through all of them. The excellent sound quality allow you to easily weave in the samples into your tracks without any additional processing needed. HybridTwo masterfully managed to maintain a nice balance between synthesized and organic source sounds ranging from analog synth waveforms and loops to rhythmic cello taps and acoustic drum sounds – just to name some very few. Apart from the great sounding cinematic FX, a strong focus was laid on rhythmic and pulsing material. Static sounds can be animated in no time by making use of the powerful modulators. The real strength of Project Chaos is found in the combination and modulation of different sound layers and categories. The wide range of factory samples that range from percussive material and FX to tonal and rhythmic loops makes it possible to create complete action-driven trailer music tracks just with this one library. The high amount of potential sample combinations and modulation options lets you discover fresh and appealing sounds with just a few clicks.

As the brand’s name and mantra implies, creating compelling hybrid sound design (merging organic and synthetic sounds) is one of their absolute strengths. This is shown to perfection with the new Project Chaos as the library holds enough excellent sounding sample material to compose a whole epic movie soundtrack. Although it already has been a significant part of Project Alpha & Bravo, the rhythmic portion of Project Chaos makes up the largest part of the library with plenty of punchy perc loops, gritty synth pulses and frenetic rhythms at your disposal.

Apart from great sounds and a comprehensive sample engine capable of deep editing and modulation options, the true unique feature of Project Chaos lies in its user-expandability. Being able to create your own sound banks and process them with the Project Chaos engine promises a long-term usage of the library as you can keep on adding fresh sounds. It also holds a possibility for user-generated expansion packs for Project Chaos, hopefully we will see some pop up in the near future!

If you’re composing for film, games or trailers and find yourself to be on a tight deadline from time to time, Project Chaos offers you a complete, ready-made sound design toolkit with excellent sounds, lots of processing and modulation options and the opportunity to create your very own custom sample sets. You truly can’t go wrong with this!

Project Chaos is available for $249.00 at Time+Space or directly via HybridTwo‘s online shop.