Regularly weighing in at around $600, for a short period of time the Impact Soundworks Orchestral Bundle is available through VSTBuzz for a ridiculous 83% discount – resulting in a promo price of just $92.

Combining over 42GB of content these libraries are perfectly suited for scoring film, TV & video games. In this article we’ll have a look into the five sample libraries included in Impact Soundworks’ Orchestral Bundle and learn, how we can get the best out of each one.

“The Orchestral Bundle” is a collection of five deeply sampled orchestral and vocal libraries produced by Impact Soundworks. These include:

Rhapsody: Orchestral Percussion represents Impact Soundworks’ flagship collection of traditional and modern symphonic percussion instruments. Included are 50 large and small percussion instruments that were captured in a medium-sized scoring stage using three different microphone positions. During the production process, the developers laid emphasis on creating a clean, warm but not overly bombastic sound that not only works for epic arrangements but also allows for small ensemble composition with a more intimate feeling.

Rhapsody’s 50 percussion instruments are pre-sorted into the eight following instrument group patches, but can also be loaded individually if desired:

The 100+ articulations captured for the various percussion instruments were sampled with up to 10 Round Robins and 5 dynamic layers, to allow for a hyper-realistic playing experience.

Although the library’s GUI offers lots of controls and customization options, it’s actually very intuitive and easy to use once you fiddled around with it for a while. On one single page, you’re provided with all the controls you need to dial in your desired sound. 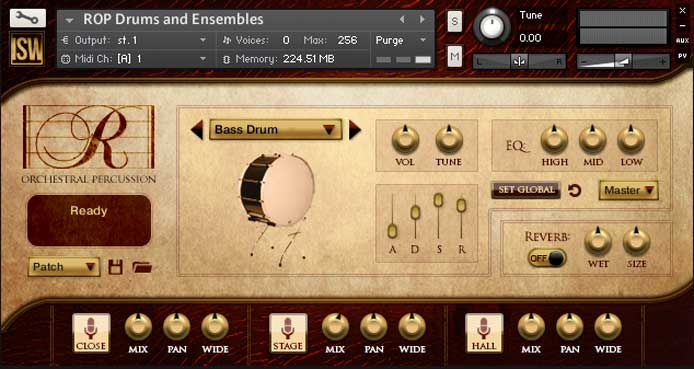 The large display in the center of the interface shows the instrument loaded – and in case of using one of the group patches – which instrument you triggered last. There’s a neat option to create and save your very own group instrument patches which can be accessed via the “patch” field on the lower left side. You can either set volume, tuning, envelope and EQ for each instrument individually or make changes globally by activating the according button on the right. The lower part of the GUI represents all the three available microphone positions including controls for volume, panning and width. These can be disabled individually to save RAM. If you feel your mix is still to dry, you can engage a built-in convolution reverb located at the lower right part of the GUI. Of course, you could as well just leave KONTAKT‘s reverb set to off and apply your own algorithmic or convolution reverb.

THE SOUND OF RHAPSODY: ORCHESTRAL PERCUSSION

The instrument collection included in Rhapsody: Orchestral Percussion features a warm, natural and clean sound that’s a bit more on the intimate side compared to other popular orchestral percussion libraries on the market. It works great right out of the box even without any additional processing or artificial reverb. However, the organic and positively un-hyped base sound of the library allows for great shaping possibilities should your arrangement require for it.

In contrast to most other symphonic or epic percussion libraries, which feature rather broad and heavy reverb tails, Rhapsody: Orchestral Percussion’s close microphone positions make it a valuable secret weapon for pop and rock music, too.

Rhapsody: Orchestral Percussion requires the Full Retail version of Kontakt 5.3 or higher and is NOT compatible with the Free Kontakt Player.

The library’s 30,000+ samples were captured in the the same focused and neutral sounding space the percussion library was recorded in, which makes it a breeze to mix and match patches of both products and achieve a coherent sound. Similar to its predecessor, Rhapsody: Orchestral Percussion, too, comes with the same three mic positions (Close, Tree, Outrigger). While each instrument section can be accessed and played individually, the real star of the library are its unique and elaborate chord patches. These patches enable you to play fully voiced and orchestrated chords by pressing just a single note. Each section can play a pre-voiced chord built on the key that was pressed. Rhapsody: Orchestral Colors comes with a huge number of modes to choose from, such as:

Apart from using the many pre-defined modes, Orchestral Colors’ powerful chord script engine allows you to fully customize your chords and even create aleatoric (random) textures.

Note: Rhapsody: Orchestral Percussion requires the Full Retail version of Kontakt 5.3 or higher (NOT compatible with the Free Kontakt Player).

Rhapsody: Orchestral Colors’ engine supports up to four ensembles in a single patch. Each ensemble has its own unique set of controls including a microphone position mix, a 4-band EQ, panning, output selection and chord voicing.

Each of the three mic positions can be loaded or unloaded for each instrument without affecting the others, so you can save on resources you don’t need at the moment. Changing all ensembles at once is also possible with the interface’s ‘link control’. 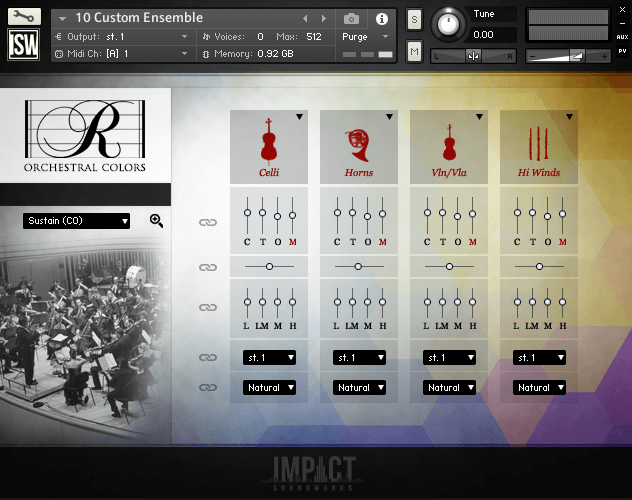 If the subtle baked-in reverb of the orchestral hall somehow doesn’t fit your project, you can choose from a collection of custom, hand-picked impulse responses ranging from huge concert halls to small chamber spaces – an easy way to achieve drastically different tones with one click.

Other useful features include the Doubler, which doubles the size and width of every ensemble, Extra Round Robins, which adds even more variations to every section (great for ostinato staccatos), and Staccato Tightness, allowing for the full range of short notes from loose and full to ultra-short and tight.

THE SOUND OF RHAPSODY: ORCHESTRAL COLORS

Similar to its predecessor, Rhapsody: Orchestral Colors comes along with a very balanced, clean and warm sound. The reverb featured in the samples sound nice and focused and more on the dry side but with a lush tail nonetheless. The individual sections of the orchestra are presented in a chamber-like size which makes their sound a perfect fit for medium-sized orchestrations.

Apart from the ingeniously thought-through chord engine, one thing that’s worth pointing out is the large dynamic range of the instrument sections that help to really craft a convincing orchestral image.

With its easy usability, solid sound, quick loading times and the unique chord engine, Rhapsody: Orchestral Colors really puts itself forward as a go-to sketching and quick orchestration tool that blends well with other libraries. The only drop of bitterness is the absence of legato patches which is manageable, taking into account the large amount of other tonal possibilities and functions.

Note: Rhapsody: Orchestral Colors requires the Full Retail version of Kontakt 5.3 or higher (NOT compatible with the Free Kontakt Player).

Furia Staccato Strings is an orchestral library designed for powerful ensemble string staccatos. Furia is a streamlined, tailor-made string library built to deliver energetic action string lines and ostinati – and just that. It is simple, with no additional features or samples. Due to its small CPU footprint and quick loading times (200MB), you can begin playing right away. With no complex UI or exhaustive patch lists, you get an instant, action-driven staccato sound out-of-the-box.

Furia was recorded with a 22-piece string ensemble in a bold sounding hall. The library’s core feature is its so-called ‘ensemble size multiplier’, which lets you multiply the size of the ensemble up to 8x for an even more epic sound.

As mentioned before, Furia’s GUI is very streamlined and features just a couple of basic controls. Apart from the Ensemble Size Multiplier, you’ll find the timing controls that let you choose the amount of random timing variations as well as a sample offset control to dial in a more direct and aggressive staccato sound (at the cost of some pre-bow noise).

Furthermore, there is a mic position mixer which gives access to the two mic positions included and lets you change or automate their volume & stereo width. Furia also comes with Impact Soundworks mandatory FX rack consisting of an EQ, compressor, delay and reverb unit. 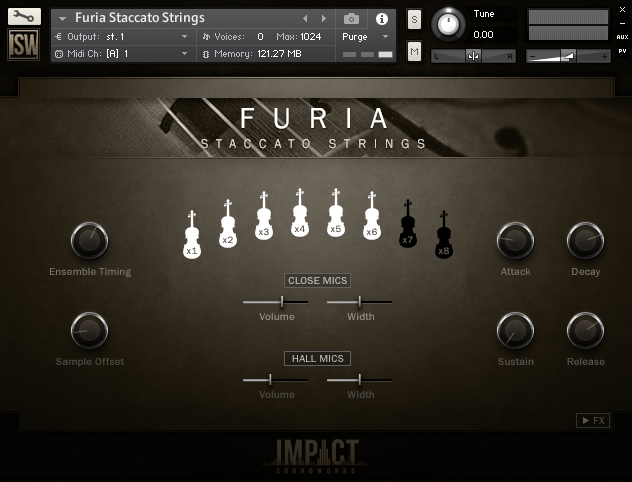 One feature I find particularly useful is the envelope shaping control that lets you dial down the decay and sustain for a very tight and aggressive staccato sound, or turn them up with release to let each note ring out. Depending on the speed and dynamics of your piece, the envelope shaper lets you dial in just the right string sound pretty easily.

THE SOUND OF FURIA

String ensemble ostinati are a staple of modern film and trailer music and a composer’s best friend when it comes to scoring dramatic action scenes or epic battles. Furia provides an easy-to-use, great sounding tool to sketch and orchestrate exactly those moments of a cue.

The sound of the string staccatos is bold and aggressive, especially when you stagger multiple layers of strings on top of each other with the ensemble size multiplier tool. Furia’s strings can cut through dense mixes and deliver a solid rhythmic foundation in deeper frequency layers. Out of the box, I found the length of the staccatos a bit too broad, especially when composing faster lines. With a few adjustments on the timing controls though, I was able to quickly adapt the speed and length of my string ostinato to the track.

On top, you get a collection of all-purpose articulations for your brass patches including sustain, staccato, tenuto and marcato. 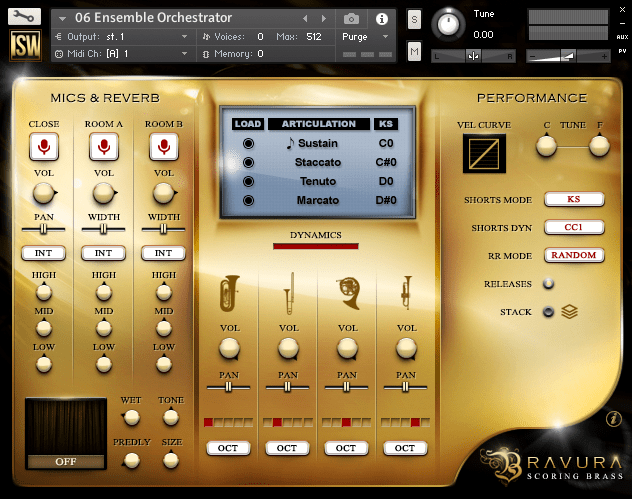 Across the whole range of instruments featured in Bravura Scoring Brass – Chords & FX you’ll find a balanced, clean and vivid sound. A stand-out feature of this library is its exceptionally well-crafted dynamic range and the tonal flexibility that comes with it. In the lower dynamics, the brass sounds beautifully round and warm whereas in the higher dynamics the instruments get way more edgy, bright and somewhat noble sounding. This flexibility covers a wide range of possible applications in a cue.

Again the Chord Maker and Orchestrator patches are the core features of this addition since they can boost the speed of your sketching an orchestration work quite drastically.

The interface of Vocalisa allows for full control over the performance and sound of each section. Articulations and syllables can be triggered via keyswitch, or sequenced using the so-called “Grid Mode”. 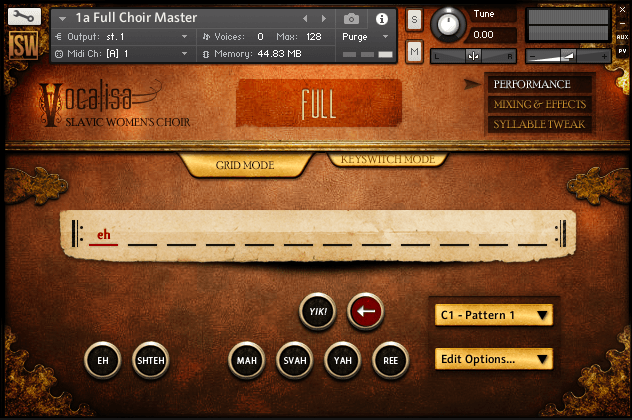 Each syllable and ornament can be tweaked individually – volume, offset, and brightness. For example, using offset on the “mah” syllable can create a simple “ah” vowel, or “shteh” can be shortened to “teh”. The brightness knob is also a highly useful tool for shaping the timbre and tonality of the performance.

The female voices featured in Vocalisa are a force to be reckoned with, this much I can say for sure. The energetic and powerful sound of the slavic choir is a perfect addition to epic orchestrations that are in need of this organic or ethnic touch. But bold and powerful isn’t the only direction you can go with the library! Playing in the lower dynamics presents you with beautiful, lush and quite unique sounding vocal pads.

There you go, over 42 GB of amazing, versatile content that should cover a great range of your orchestral scoring needs for a fraction of its original price.

The Orchestral Bundle is the perfect starting point for anyone looking to get into Film, TV & Video Game scoring! Usually costing around $600, you just can’t go wrong with this ridiculous $92 VSTBuzz Deal. In case you missed the deal, Impact Soundworks still offers an Orchestral Bundle Deal with a slightly different constellation (Concert Grand Piano instead of Vocalisa & the full Bravura Scoring Brass) for $449 which is still a pretty fair price considering the incredible amount of content you get with it.