Hollywood Choirs features a symphonic female and male choir meticulously captured by a collection of high-end microphones on a professional scoring stage. Probably its biggest feature is its one-of-a-kind WorldBuilder engine which enables composers to type in their very own lyrics and have them sung by the virtual choir.

In this review, we’re going to have a close listen and look into this comprehensive 59 GB cinematic choir instrument and find out together what features can make it stand apart from its competitors.

When East West/Quantum Leap brought out Symphonic Choirs back in 2005, the library’s concept and engine was a real game changer. Not only made it a full symphonic, Hollywood-style choir available to any composer, it also came with a groundbreaking new WordBuilder feature, that for the first time ever allowed for typing in lyrics – or phonetics rather – which would be sung by the choir. This unique feature and the overall convincing, cinematic sound of the instrument made Symphonic Choirs a huge success and was pretty much used by every film composer working with samples back in the day.

I remember working in studios quite a few years back, that were heavily relying on Symphonic Choirs for orchestral productions. While the library did in fact yield amazing results, the WordBuilder engine was an absolute nightmare in terms of usability and control. So much, that the engine alone came with its own, 200+ page manual. 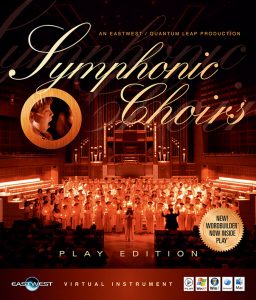 Almost 15 years later, sampling world has progressed massively and a lot of really powerful, great sounding and easy-to-use symphonic choir libraries came out since then. Among those are amazing choral products like 8dio‘s Lacrimosa, Strezov Sampling’s Storm Choir or more recently Performance Sampling‘s streamlined Oceania Choir. Now East West teamed up again with Quantum Leap, trying to bring back the glory of their award-winning Symphonic Choirs library and take it to today’s standards.

Note: For our test, we were provided with the Diamond Edition of Hollywood Choirs which features all available microphone mixes and comes in 24bit format. Please keep in mind that other editions like the Gold (Main mics only, 16bit) or Composer Cloud Edition (Main & Surround Mics, 16bit) include less or other microphone constellations and bit depths.

Hollywood Choirs was recorded in the same hall as East West’s other Hollywood-series instruments. It features a full-size, symphonic women’s and men’s choir, both accessible individually. The samples were recorded using not less than 13 microphones positioned across the hall, that can freely be mixed and controlled via 5 microphone groups in the GUI (referring to the Diamond Edition of Hollywood Choirs). Like all the other libraries made by East West, Hollywood Choirs is powered by the developer’s very own sampling engine PLAY 6 which you can download for free prior to installing the product.

While the Diamond Edition is a whopping 59 GB in size, the feature-reduced Gold and Composer Cloud Editions comes with 8 GB and 16 GB respectively.

Hollywood Choirs requires the latest version of PLAY in order to run properly. The software can be downloaded for free via the EW Installation Center, East West’s own download manager.

Apart from a shiny new look, version 6 of East West’s PLAY engine comes with some pretty neat updates. The overall layout appears more organized and the browser is now equipped with a helpful instrument search database that makes finding the right patch a lot easier. 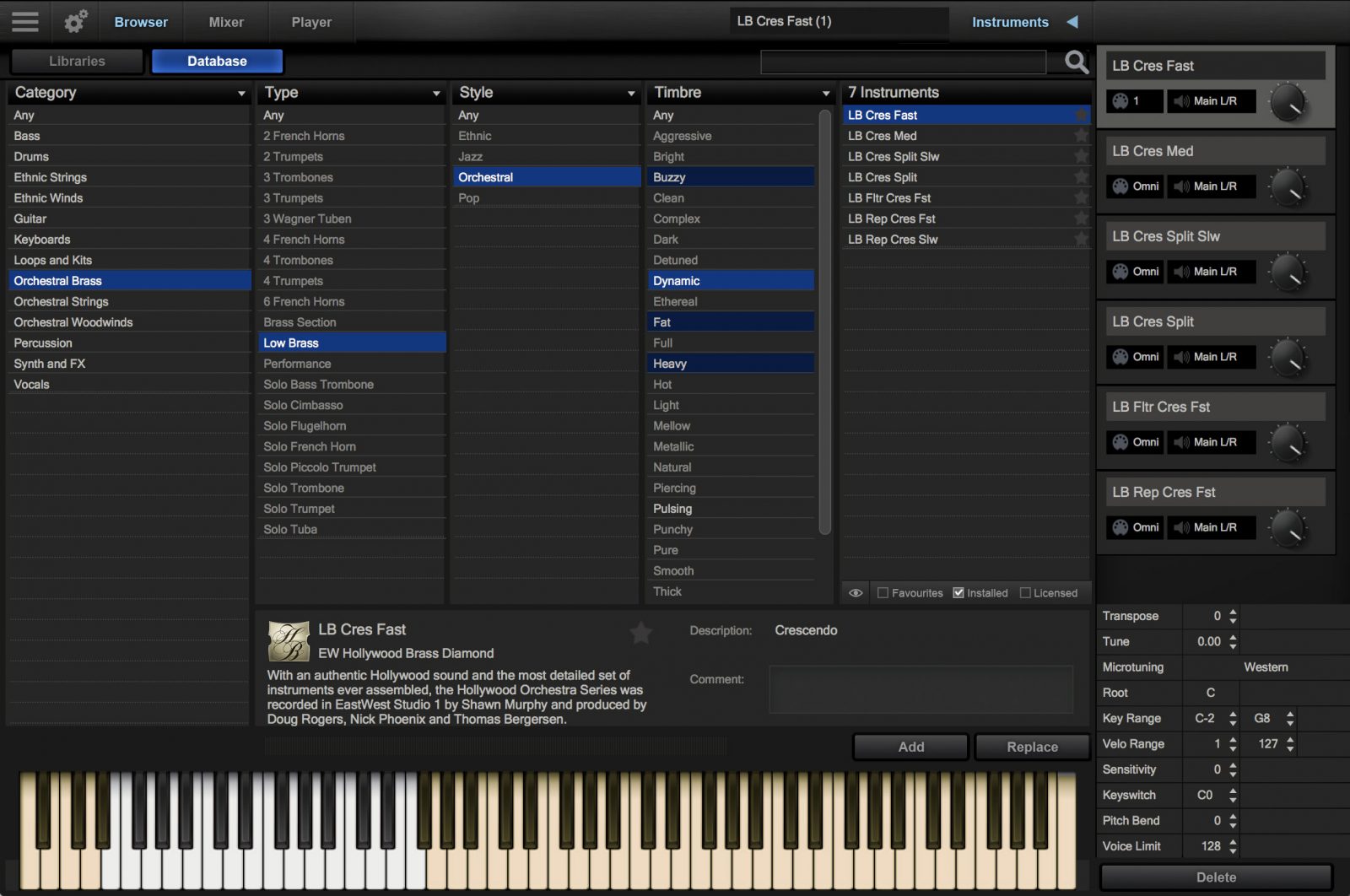 Also new is the Instruments Sidebar on the Player tab which displays all loaded instruments and their MIDI channel, audio output and volume controls for quick adjustments. PLAY 6 now supports the NKS standard which provides full integration of Native Instruments‘ range of hardware controllers.

HOLLYWOOD CHOIRS IN USE

Hollywood Choirs comes with a host of different consonant and vowel patches for both the men and women but the completely revamped WordBuilder 2 is probably the instrument’s biggest selling point. Before diving into the functions of this new engine though, let’s quickly take a look at the core functions and articulations of the library.

While the old Symphonic Choirs had individual sections available for women (sopranos and alto) as well as for the men (tenors and basses), Hollywood Choirs combined those four sections into just two. Main reason for this, according to East West themselves, is a more powerful sound by taking advantage of overlapping vocal ranges as well as an enhanced ease of use that comes with having to deal with just two voice groups in the WordBuilder.

And indeed, all across the different patches, the sound of the choir is powerful, clear and balanced. What also stands out is the very low noise floor presented in the samples, which is quite a task to accomplish with so many people in a room. Turning off the built-in convolution reverb reveals, that the hall the choir was recorded in provides a nice sense of space but also sounds fairly dry. This enables you to add your very own space to the choir to blend it with the rest of your orchestra without drowning it in layers of reverb.

While the consonant patches provide short vocal sounds mostly used in the WordBuilder, the vowels patches contain sustained loop instruments that use the Mod Wheel (CC1) to crossfade between 3 dynamic layers (mp, mf & ff). Also controlled by CC1 is the strength of the choir’s vibrato which is a bit inconvenient as it doesn’t allow you to control the dynamics and vibrato separately. Some vowels (ah, ee, eh, oh, oo) also have multiple articulations including polyphonic legato, staccato, expressive fortissimo vibratos, and epic (two crossfadeable vibrato layers). 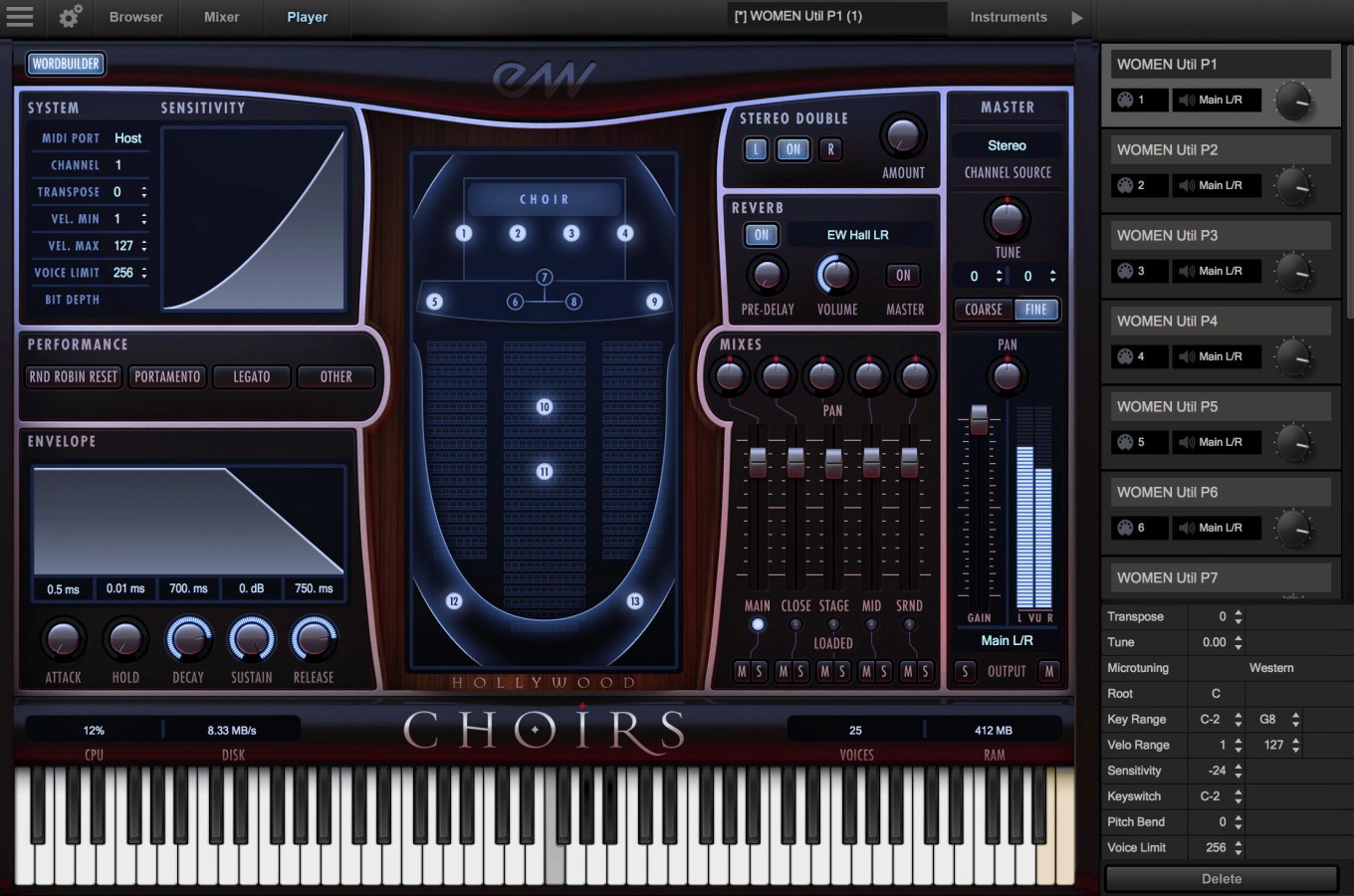 Although their sound is flawless, sadly those patches somehow seem to be put in second place. The staccatos for example feature only two round robins which is a bit outdated and the legatos – the most essential choir articulation for most composers – just doesn’t convince at all. This has been done way more realistic and comprehensively by other developers. Nevertheless, the various sustain patches perform nicely and offer a great range of dynamics from mellow pads to epic triple forte “choir walls”.

Another thing I’m missing are multi-articulation patches and the ability to assign keyswitches with different articulation or vowels. This would be a tremendously helpful feature to help creating dynamic and diversified sounds without having to load a bunch of separate instruments.

Let us come to the heart of East West’s Hollywood Choir library: the completely refurbished WordBuilder 2 that turns written text into sung words. The WordBuilder engine is now built into East West’s PLAY engine and can either be accessed by clicking on the top left button of the interface or by loading up one of the many WB Multi patches that come with both choir sections.

WordBuilder’s concept is quite complicated but in essence, the engine operates by using three different phonetic languages: English, Phonetic and “Votox”. The latter one is a phonetic language specifically designed for Hollywood Choirs and supposedly yields the best results in terms of intelligibility and authenticity. While English text is interpreted as is, the Phonetic mode uses the traditional phonetic alphabet. Votox one the other hand uses its very own phonetic symbols which already contain information about the length, pronunciation and crossfades between words.

To create phrases or lyrics, you combine words or phonetic symbols by either sequencing them or typing them directly into the engine’s text editor. What’s really helpful is that any word you type in the editor automatically gets analyzed and translated by all three text modes simultaneosly. This allows you to first type in your lyrics in English and then switch over to Phonetics or Votox to adjust your performance’s length and timing using the engine’s time editor. 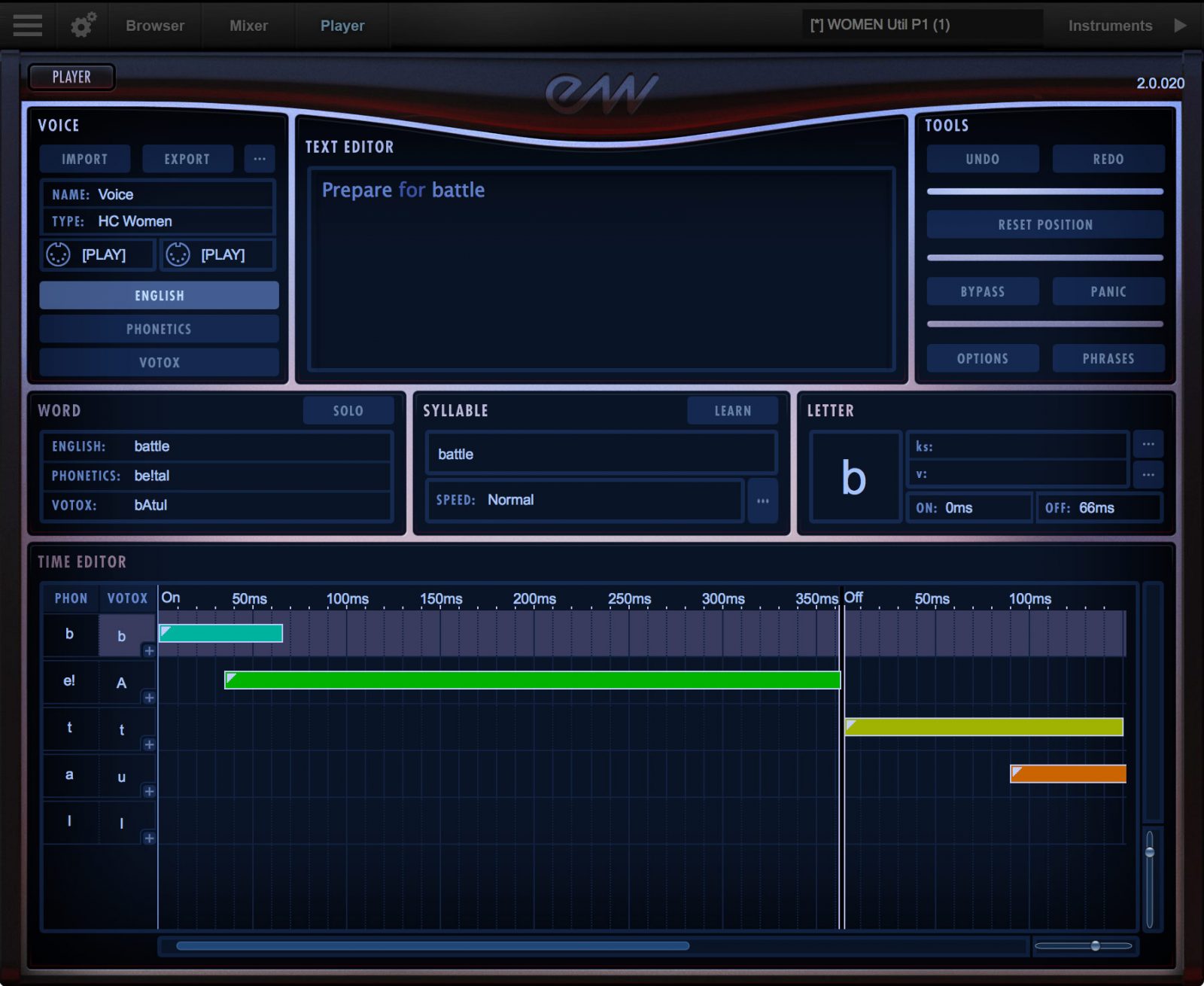 Although its recommended to get used to the phonetic symbols and their notation, you don’t have to do all the work yourself if you don’t want to. Luckily, Hollywood Choirs comes with over 110 pre-programmed phrases in English, Latin and German you can choose from. A recent update for the library added – among other significant enhancements – another 100 extra phrases which should have you fixed for quite some time.

Going about all the elaborate functions included in the new WordBuilder 2 would go beyond the scope of this review, but it’s all documented very well in the manual and walkthrough video (found at the end of this article). To sum it up, East West’s WordBuilder 2 still is a very complex system that requires quite a few hours of intense learning in order to perfect it. Anyone who puts in the necessary time, will get rewarded with a realistic sounding choir performance that can literally sing anything. Anyone who doesn’t, can still use the many pre-designed phrases and get amazing results.

I got to be honest with you here for a second. This sample library is probably the hardest one for me to rate yet. While Hollywood Choirs’ WordBuilder engine is absolutely astonishing, comprehensive and unique in nature, other parts of the library have such serious flaws that it’s literally impossible to make a clear, overall statement.

I love the sound and tonal quality of the library, it really sells the product’s title in capital letters: HOLLYWOOD. Both choirs sound dynamic and powerful in any range and the overall sound is pristine in nature. However, this positive first impression gets dulled by the striking absence of proper staccato, marcato, and legato patches. Having only two Round Robins for short articulations is a sample standard straight from the 90s. And for god’s sake, why wouldn’t you include a real slurred legato in such an ambitious project? It seems to me as if East West / Quantum Leap put so much effort into creating a top-notch word builder (which they sure managed to accomplish!), that they forgot about all the other important features that make a great, state-of-the-art 2018-style choir library.

So, would I recommend getting Hollywood Choirs? The answer is: it depends. When you’re looking for a great all-round symphonic choir library that provides you with a variety of convincing articulations, real legato patches and maybe even choral FX…Well, then Hollywood Choirs maybe just isn’t for you. There are many other symphonic choir libraries out there that definitely do a better job here. However, if a flexible and powerful engine that helps you create realistic, customized choir performances is the thing you’re searching for, then you might want to look no further. Hollywood Choirs is – to my knowledge – the only one on the market that can do something like that, and it does it very well.

By the way: if you’re already a member of East West’s Composer Cloud subscription plan, Hollywood Choirs is already available to you for no additional cost right now. If you’d like to upgrade to the Diamond Edition, you can do so anytime.

Hollywood Choirs is available in 3 editions. The Diamond Edition ($599) featuring all 5 microphone sets and 24bit samples, the Gold Edition ($499) including only the Main mics and 16bit samples as well as the Composer Cloud Edition which is included in your account if you are a subscriber. All three editions can be purchased via East West’s Soundsonline webstore.