Earlier this year, virtual instruments and cinematic sound effects developer Audio Imperia released their very own take on delivering a truly unique, cinematic piano: The Klavier range. Consisting of two individual products, Audio Imperia’s Klavier range includes the Gravitas Piano as well as the Red Planet Piano, both combining the sound of a natural grand piano with synthesized sound design elements, perfectly suited for the use in film and trailer music.

Now just recently, Audio Imperia teamed up with AudioPluginDeals and launched a phenomenal deal which offers 66% off the original price on the Klavier library bundle. Instead of the products’ regular price of $289.00, until December 29th, you can get Gravitas and Red Planet for just $99.00.

I took this occasion as a chance to revisit both libraries and to provide you with a review on Audio Imperia’s Gravitas & Red Planet Piano.

Like mentioned in the intro, Audio Imperia’s Klavier bundle is composed of two distinct libraries. Both feature the sound of a meticulously sampled grand piano, in this case a Yamaha Baby Grand, combined with a wealth of processed and synthesized sound design elements. Those sound design elements were created by leading composers and sound designers of the trailer music industry like Danny Cocke, Attila Àts and Joshua Crispin, using the original piano recordings as source material.

For Red Planet, instead of using the piano samples as a starting point, the sound designers used recordings of a limited-edition Ibanez JPM90HAM electric guitar, which went through a heavy processing and modulation treatment, turning it into a synthesizer, effectively.

The sound of Red Planet is massively inspired by Harry Gregson-Williams’ soundtrack for ‘The Martian’ and is designed to reflect an outer-space kind of sonic scape.

In order to capture a nuanced and flexible sound scape, the grand piano was sampled using a variety of elusive microphones including brands like Brauner, DPA, Neumann, Coles and Earthworks.

An integral part of the library’s concept is the possibility to seamlessly blend the organic piano sound with various synthesized pads and atmospheric sounds, using the interface’s central element – the big knob. Dialed to the left, it leaves you with only the organic portion of the piano, while turning it up to the right adds in the second, synthesized layer.

The left side of the interface deals with the piano portion of Gravitas and Red Planet. From here, you can dial in different blends of the six available stereo microphone positions as well as switch articulations from ‘sustained’ to ‘staccato’.

Directly opposite on the right side, you’ll find access to 35 sound design presets by clicking on the drop-down menu. Please note that only one preset can be loaded at a time and mixed with the organic piano. Below the drop-down menu, we have AHDSR controls to shape the attack, release and sustain part of a given sound even further. 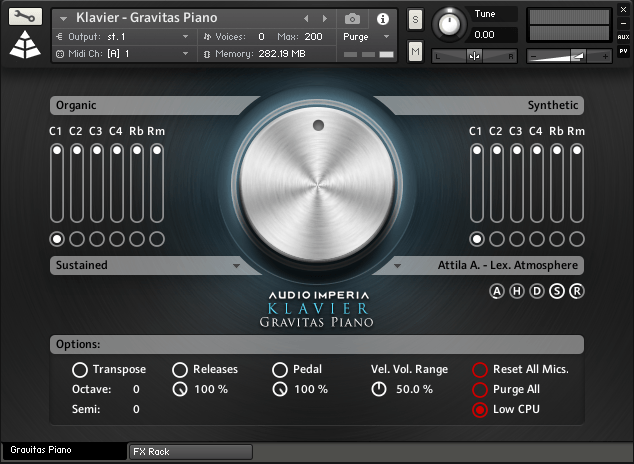 The bottom area of the interface functions as a global controls panel, offering you transposition controls as well as pedal noise, velocity control and purging options.

By clicking on the second tab located at the lower left bottom of the GUI, you gain access to the engine’s FX Rack. Featuring three FX pages, you’re provided with a wealth of different saturation, modulation, spacial and dynamic effects. Those effects can be assigned to either the organic or synthesized portion of your patch only, or routed globally to the whole patch. 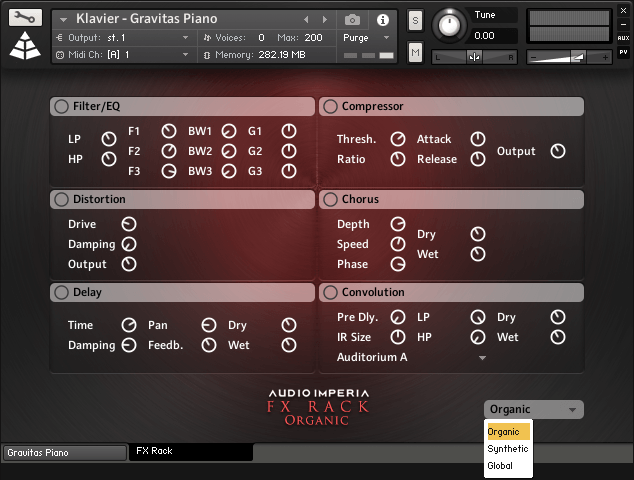 All in all, the straightforwardness and simplicity of the interface results in a great usability and enables you to come up with awesome sound in literally no time.

The sound of the sampled Yamaha Baby Grand piano alone is very fresh, pristine and balanced across the whole key range. The samples have been captured flawlessly and the multitude of microphone positions available allow for a wide range of tonal options, ranging from an upfront, intimate sound to a wide and roomy piano perspective.

Certainly, there are more deep-sampled pianos out there on the market in terms of round robins, expression and dynamic range. However, to my knowledge, it wasn’t even a goal to compete with those. Instead, we’re provided with a piano sound that has quite some punch and is able to cut through a dense mix. This is what makes the Klavier range a perfect fit for cinematic, epic and trailer music. The slightly hyped sound of the piano can effortlessly compete with walls of brass and thick string arrangements while at the same time blending in nicely into the track.

Now, stopping here would do the library injustice since the piano part represents only half of the product, really. The synthesized sound design portion of Gravitas & Red Planet is what really sets the instruments apart from others on the market.

Blending in one of the synthesized sound presets instantly transforms the piano into a cinematic color of its own, enhancing the base sound and putting it into a wide space. Some of the presets add an octave or two to the piano (like most of the Bryan Leach presets) or change the piano’s sound into something else, sometimes resembling the tone of an electric piano put into a spaced-out room.

By working with the interface’s big knob, you can keep the edge and punch of the raw piano while adding shimmer and space around it which really excels in cinematic productions.

To see and hear some of the diverse sonic possibilities of Gravitas & Red Planet, watch a clip of Dream Theater’s keyboardist & wizard Jordan Rudess testing out and showcasing the libraries:

Both the Gravitas Piano and the Red Planet Piano offer a really new approach to piano sampling by combining a rich and powerful piano sound with cinematic synth pads and atmospheres. This makes both products a perfect choice for the use in trailer music, game music and film scores. The libraries’ interfaces feature only the most essential controls to grant users a quick entry into the products. With only a few adjustments you’re able to generate astonishing hybrid piano sounds on the fly. The multitude of available synth presets delivers a gold mine of interesting, cinematic sounds. Personally, I would have been happy even with less available microphone positions for the sake of loading size, but they are definitely nice to have in case you really want to shape the piano’s sound more thoroughly.

One thing, that I would love to see in a future update would be the possibility to add more than one synth preset to the piano sound or even being able to combine patches from both libraries in a single instance. This option would open up a world of really complex and unique sounding opportunities.

All in all, Audio Imperia’s Klavier bundle makes for an excellent addition to every modern composer’s sonic palette, regardless of whether you’re doing cinematic music, electronic music or pop music. With an easy-to-use interface and a multitude of great sounds, Gravitas & Red Planet add a sense of unique-ness to your productions that a plain piano sound would never be able to. Now with the current deal running on AudioPluginDeals, getting the Klavier bundle is really a no-brainer.

The Klavier bundle including both the Gravitas and Red Planet Piano is currently available for a whopping 66% discount via AudioPluginDeals, lowering the bundle’s price from $298.00 to $99.00. This sale is only running until December 29th, so if you were thinking about getting the Klavier bundle in the past, now would be the perfect time.

After the sale has finished, you can get the bundle for the regular price from Audio Imperia‘s online shop.