In 9GB of sample content, you’ll find 120 meticulously designed, mixed and mastered cinematic sound effects. Each sound file contains a variety of alternate versions, edits and lengths of a certain sound, resulting in a total of over 450 sounds to choose from. Cinematic Trailers Designed 2 is available either as a Stereo and a 5.1 Surround version, with all the containing sounds recorded in pristine 96kHz / 24bit audio quality.

Both versions contain the exact same sounds from the following categories:

For this review, I was provided with the Stereo version of Cinematic Trailers Designed 2.

When I was listening through the different sound categories for the first time, one thing that struck me right from the beginning was the fidelity and sonic quality of the sounds. Each hit, boom and riser sounded well-balanced in frequency and was mixed for maximum impact. Although most of the sounds are processed and limited quite heavily in order to cut through a dense mix, I couldn’t spot any serious artifacts or annoying clipping effects.

In recent times, sound designers seem to incorporate more and more distortion into their trailer sound effects packs – sometimes up to a point where most sounds feel washed out and broken. This may be a sonic trend that emerged to strive against other loud elements of a trailer mix, but to my opinion, distorting everything leaves most sounds weaker and less assertive than before. This being told, for me it was really refreshing to listen to Cinematic Trailers 2’s big and badass – yet clean – sounds.

Cinematic Trailers 2 comes with a good blend of both organic and synthetic sounding FX. This is particularly apparent when having a look (or listen rather) at the Hits section. You’ll find a good amount of impact sounds that are composed of organic sound sources like drums, explosions and various metals. In the SciFi Hits category as well as in the Drops, you’ll find sounds mostly deriving from synthesizers, although more than a few have some organic sounds mixed in. Being presented with both organic and synthetic sounds opens up the usage of this library to a broad range of cinematic styles and applications.

Although the SFX library contains quite a number of sounds to choose from, it feels like no file was included without a purpose. Most sounds feel very flexible, yet unique enough to strike attention. Each category provides a healthy balance of bread-and-butter sounds and more elaborate FX. In contrast to my initial impression when I first opened the sounds folder, there is really more than enough to choose from – especially if you keep in mind that each sound brings a fair bit of alternative versions along.

If you already own another BOOM Library product, you’ll know that the brand is noted for meticulously tagging and labeling their sounds with valuable metadata. Not only does Cinematic Trailers 2 come with a thorough metadata sheet with detailed descriptions for every file, also the files themselves contain extensive information about their category, sonic color, intensity and more. 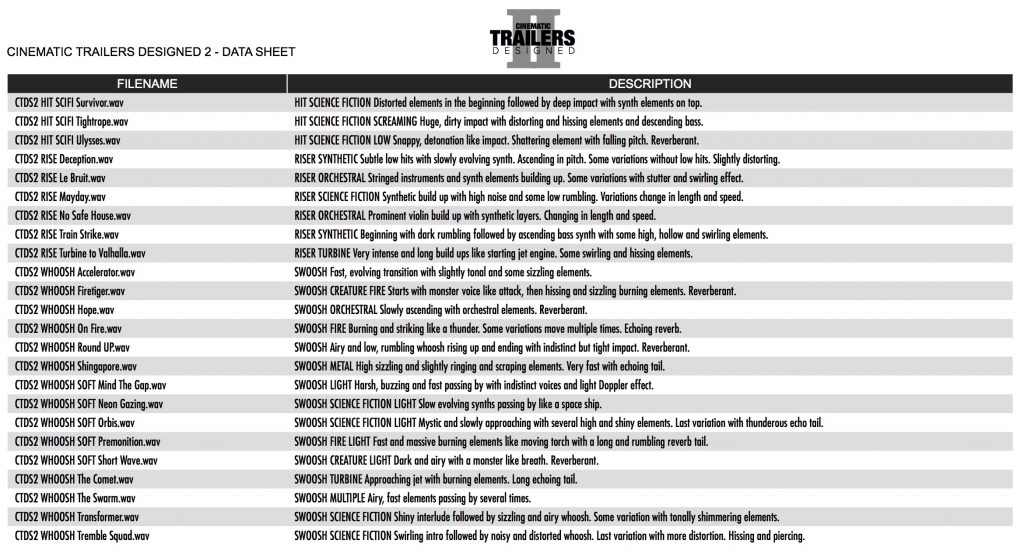 If you’re used to working with audio search engines like Soundminer or AudioFinder, BOOM Library’s tagging effort allows you to search for particular sounds using keywords (e.g. “Low”, “Metallic”, “Boom”, “Reverberant”). This can speed up the process of searching and finding the right sound(s) for your specific project quite drastically – especially if you’re dealing with a large database of samples.

By using the keyword method described above it’s really easy to quickly come up with sounds that fit a particular need due to BOOM Library’s good tagging work. Just drag them into your project, adjust the volume and there you go. I rarely found myself reaching for any additional processing apart from the occasional low-cut filter if a particular sound was too overpowering. One thing I’m not a big fan of is having multiple sounds or alternate takes in one audio file. Although I understand that this method keeps everything well-organized in the folder and saves some metadata/tagging work, I think it’s not the most useful way to work with those files seen from a user’s standpoint.

For one thing, I don’t like importing a large chunk of audio into my project if I just need that one bit from the beginning. Going this way with many files can clutter up your project’s file bin and size really quick and is somewhat unnecessary. For another thing, I like to have one sound per file so I can quickly listen to each one manually. Having multiple sounds of the same style laid out in one single file not only forces you to wait and listen through the whole thing, but also tricked me into using only the first sounds in the row very often, since I forgot there was more coming after that.

Now this might be a very personal opinion, so I wouldn’t necessarily point it out as a flaw of the library. I see a big advantage of keeping sounds together like this when dealing with various samples of the same thing – like footsteps, gunshots and such. Dealing with sound effects that are similar but different however, I’d rather go the one-sound-per-file way. 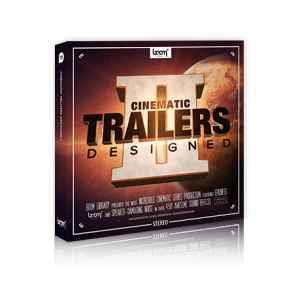 is an awesome sounding, well-sorted cinematic sound effects library with a lot of high quality material to choose from. Its mixture of organic and synthetic sound effects cover a wide range of cinematic trailer styles from modern SciFi action to epic fantasy trailers. All the sounds are mixed and mastered for maximum impact while still sounding natural and clean. The library’s well-grounded metadata makes finding the right sounds for your project a breeze, especially if you use it in conjunction with an audio search engine like Soundminer. Just pick a sound, drag it into your project and you’re done.

For people who would like to learn what the designed sounds were made of and want to get a bit more creative, it would have been great to have access to a “Construction Kit” type of folder containing some source material.

The sonic quality, variety and ease of use make Cinematic Trailers Designed 2 an essential tool for both trailer music composers and editors alike. With Cinematic Trailers Designed 2, you’ll get over 450 meticulously designed and mastered, ready-to-use trailer sound effects to spice up your projects with – for the reasonable price of €149.00 / $158.00 (Stereo version) or €199.00 / $211.00 (Surround version). Highly recommended!