I had the chance to test the new sample library and will share my insights with you in the following review.

After the installation, Decimator Drums occupies around 2.2 GB on your hard drive and comes with the following four sections:

Decimator Drums‘ main interface is designed in a pretty straightforward fashion. Besides standard controls for volume, pan and basic envelope shaping, you’re provided with a High Cut and Low Cut filter as well as a parametric 3-band EQ.
An interesting feature borrowed from Audio Imperia’s Klavier range is Decimator Drums so-called “Big Knob”. It serves as a global insert effect or master control which you can assign up to 7 different effects to. Those include common processing units like compression, distortion, bit crushing, chorus and phasing effects. What’s special about this concept is that Big Knob lets you assign any parameter of the FX units to its wheel control in order to create unique and adjustable processing chains for your drums and loops. More on that later in the review.

All of the drums in the library were recorded with a single matched pair of AKG C414 XLII microphones in mid/side configuration in a closed studio environment. The sampled playable drums contain the following kit pieces/articulations:

The drums were recorded in three segments and then layered and mixed together (three players playing two drums each, 3×6=18).

Heart and centerpiece of the library are the two Ensemble Drums patches. They come in two different flavors, one representing a more organic and raw version of the recorded drums and the other one providing you with a hyped and processed sounding version perfectly suited to epic trailer music.
The individual kit pieces (kicks, toms, sticks, etc.) are laid out on 8 keys from C1 to G1. The same samples are mirrored one octave above, which allows you to perform fast and accented rhythms using both hands. 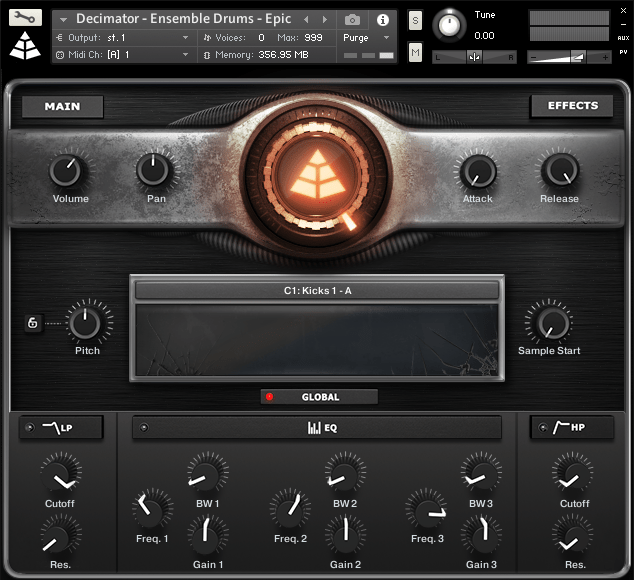 On both the Raw and Epic patch, the kit pieces got a punchy and powerful sound to them combined with an accentuated attack. Due to the generous amount of dynamic layers and round robins, you’re able to perform very expressive rhythmic lines and build-ups.
Although the samples are recorded quite upfront and direct, they bring a pleasant amount of reverberant splosh with them, that was probably added after recording the drums in a dry environment. The lush reverb helps to set the drums ensemble back a bit and put it in the right cinematic context. At the same time, it’s short enough to not cloud the entire mix when playing rapid lines.

The 20 Designed Kits included are based on processed and mangled versions of the original drum ensemble samples. In contrast to the Ensemble Drums patches though, they only provide one sample and round robin per key.
While some patches contain interesting and usable processing approaches like envelope shaping or filtering, many rely on medium to heavy amounts of distortion and bitcrushing. This is a bit of a shame since it makes the kits sound pretty similar (at least for me) and crushed. This can make it hard to incorporate these sounds into an arrangement properly. However, they surely are useful when you treat them as stand-alone elements or effects of a cue.

Decimator Drums comes with 26 rhythmic loops programmed from the library’s core sample material. The library’s automatically syncs the loops to your host’s tempo. The GUI’s drop down menu lets you choose between one of the loops which is then assigned to C0 on the keyboard. Each so-called “Full Loop” comes with its according stems (usually 4-5 individual loops) to allow for building your own dynamic arrangements.
The loops provide quite a few interesting rhythms that work well as rhythmic cue starters and inspire to write some vivid string ostinati over them. Among the loops, you can find both rhythms in straight and triplet feels which opens up their range of use to a much wider spectrum. 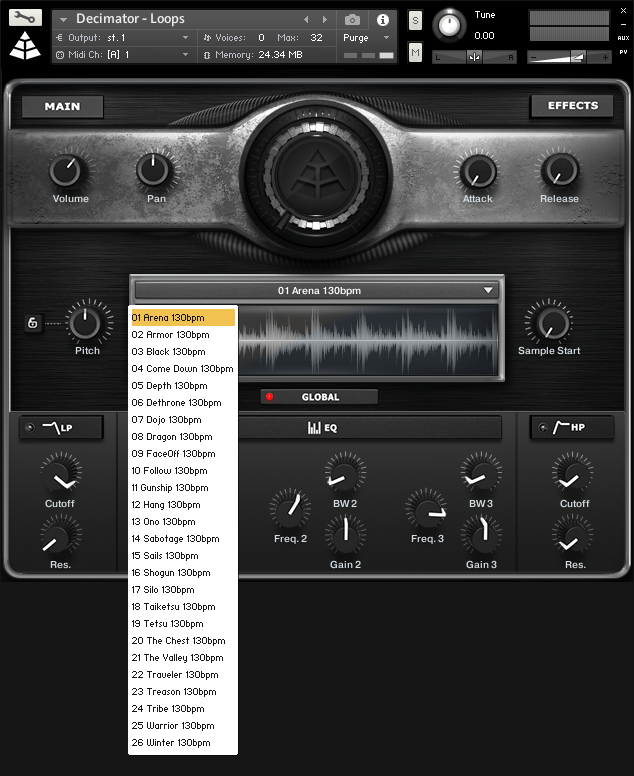 The loops included in Decimator Drums are thoroughly programmed in 130 BPM. While this might be an ideal tempo for fast action cues, it left me with quite some problems when I tried to work them into some slower pieces of mine. Although percussive material is usually pretty forgiving to time-stretching, I was confronted with audible artifacts and glitches when playing back loops on slower tempos of 90 BPM and below. That’s a real bummer because most tracks in trailer music at the moment are not running faster than about 75 to 90 BPM. Since those loops are particularly designed for the use in cinematic and trailer music, Audio Imperia might want to think about adding a tempo adjustment feature that automatically plays back a given loop in double time if it gets stretched too far.

The Extras section of Decimator Drums features a variety of additional effects that were made from intensively manipulating the source sounds. These sounds range from atonal stingers, whooshes and complex transformations to tonal FX, risers and couple of pulses or arps.
Although these sounds are treated like a bonus section, they contain some pretty neat and unique samples in my opinion. The three Atonal FX patches in particular, feature a lot of great material really worth checking out.

As mentioned before, Decimator Drums’ Big Knob can be assigned with a variety of FX and parameters to mangle and process your drum ensemble’s sounds with. Assigning effects to the big control is pretty easy. Just click on the main interface’s Effects tab in the upper right corner and proceed to the Big Knob section. From there, you can simply choose any effects processor you like and assign its parameters via the Assign Panel below. One neat additional feature of the Assign Panel is that you can determine a precise start and end point percentage of a given parameter. This allows for a great control over the effect a parameter has on your sound when the Big Knob is turned up. 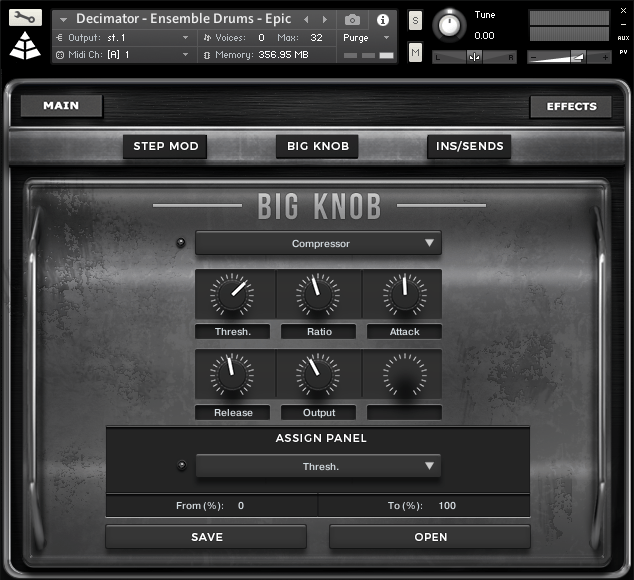 Decimator Drums also comes with a complex step modulator script, which allows you to draw complex curves for controlling up to 10 independent modifiers:

Volume and Pan are designed in a way, so that you can activate more than one step modulator at a time without any conflicting. In addition, you can control the number of steps, the frequency and the intensity.
The step modulator is controlled using keyswitches (from C6 to A6). The keyswitches’ colors represent the individual effect blocks found on the “Step Mod” page of the FX panel.

DECIMATOR DRUMS IN USE

Decimator Drums is an remarkably easy-to-use sample library whose sounds will surely be heard in a lot of trailer music tracks from now on. Its particular strength definitely lies in the playable ensemble drums patches. The various kit pieces sound explosive, punchy and powerful and the grandiose room tone helps convey the drums’ cinematic qualities. Due to the vast number of dynamic layers and round robins that have been sampled, it’s very easy to perform convincing and expressive percussion lines – either slow and powerful or driving and fast.
Decimator Drums’ pre-programmed loops serve well as supporting rhythmical elements for any faster action cue and the possibility to trigger single stems offers a good deal of expressive options. However, unfortunately the loops don’t perform as well on tempos below 90 BPM where unpleasant timestretching artifacts get in the way.
I can see the library’s designed drum kits working really well as stand-alone FX elements in a mix. Although a good deal of those drum kits sound rather similar due to the extensive use of distortion and compression, you can find some interesting and outstanding gems among them. Also, making use of Audio Imperia’s comprehensive Big Knob feature and Step Modulator can take any sound you throw at it to a new, unique level – be it drum hits, loops or pre-processed FX.

Decimator Drums is a well-designed and powerful sounding library with a great sonic core that can easily hold up against other established epic drum and percussion libraries on the market. Its straightforward concept and easy customization options, inspire creativity and encourage to make the provided sounds your own.
The few quirks I mentioned could easily be dealt with on a possible future update and the producers might have another thought on their use of distortion. Apart from that, I highly recommend Decimator Drums to anyone who’s looking to inject action packed percussion into their trailer, game and action music.
Decimator Drums is currently available for an introductory price of $119.00 (regular: $159.00) via Audio Imperia‘s online store.