EPICOMPOSER: Robert, first of all, thank you so much for taking the time to do this interview with us for Epicomposer.com! Many of our readers will probably know your name and brand by now. Would you still tell us a bit about yourself and how you started out in the business?

RLB: I moved to LA in 2001 and was invited by Hans Zimmer to be his assistant for a bit. The time spent with Hans and everyone else there at Remote Control Productions was pretty transformative and it lead to many things, one of which was meeting the legendary trailer music supervisor and label owner, Ruben Nava. He was a real mentor for me and a dear friend. Through his company, I personally scored or had music licensed into almost 100 film campaigns in the 2000’s.

EPICOMPOSER: You’re just in the process of releasing a brand-new trailer music album with Glory Blood + Oath called LIVE AS LIONS which is coming out this summer. It’s your brand’s 12th trailer music release and it’s going to be a special one. According to the album teaser you published recently, you didn’t go through the extra effort of recording with real orchestras for the sake of sound only, but you also wanted to raise awareness on a particular production issue of today’s music industry. Please let us in on that.

RLB: Yes we are trying to raise awareness about the fact that musicians are being replaced by computers in the orchestral film music world. Widely known in the creative industry, but the general public is quite unaware. Hearing orchestral music performed by actual human beings is increasingly becoming a novelty. It’s something that, as a society, we are going to have to come to terms with. Do we want to live in a world where young people who dream of dedicating their lives to playing the instrument they love, actually have an opportunity to do that? Or are professional performing musicians going to be a relic of the past? 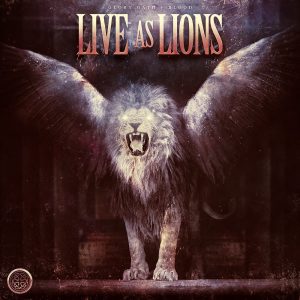 What’s important to realize here is that this isn’t simply a natural change in culture, favoring electronic music… This is just a cheap and easy way to make organic music, by artificially simulating it, and at the expense of having to ask a human to perform it. I don’t place any blame on composers, the blame lies with the people who fund composers work. But ultimately, the only people who will be able to affect any change in this will be composers and music producers. It’s up to us to convey the importance of live recording to the individuals who finance our work.

EPICOMPOSER: Obviously, not every trailer music composer has access to a symphonic orchestra or even a live ensemble section. Which advise would you give to aspiring composers who still want to incorporate the charm of a live orchestra into their productions?

RLB: Working with sampleware is a great way to explore orchestral composition and arranging, if sampleware is your first experience in hearing something like an orchestra perform your compositions.  The next step is to make friends with a musician, get a mic and layer them onto your cues. You’ll be amazed at the sonic improvement from just layering a single violinist on top of your string samples. Then when you get your first paying gig, try to get some money to record 5 string players. When you get your 40th gig, try to get an orchestra.

EPICOMPOSER: Listening to your music being played live by an orchestra will always be something special, but recording with world-class musicians at the legendary Abbey Road Studios must have been an experience of its own. How did you feel wandering in those hallowed halls?

RLB: Getting to record your compositions at Abbey Road is an experience like no other, bordering on the religious for any composer, no matter how seasoned, and also no matter how many times you might have done it before. I’ve been there a number of times, and still, when I re-encounter that musty smell of Studio 1… I’m just overcome with awe, thinking of all the amazing music that has come to life there. 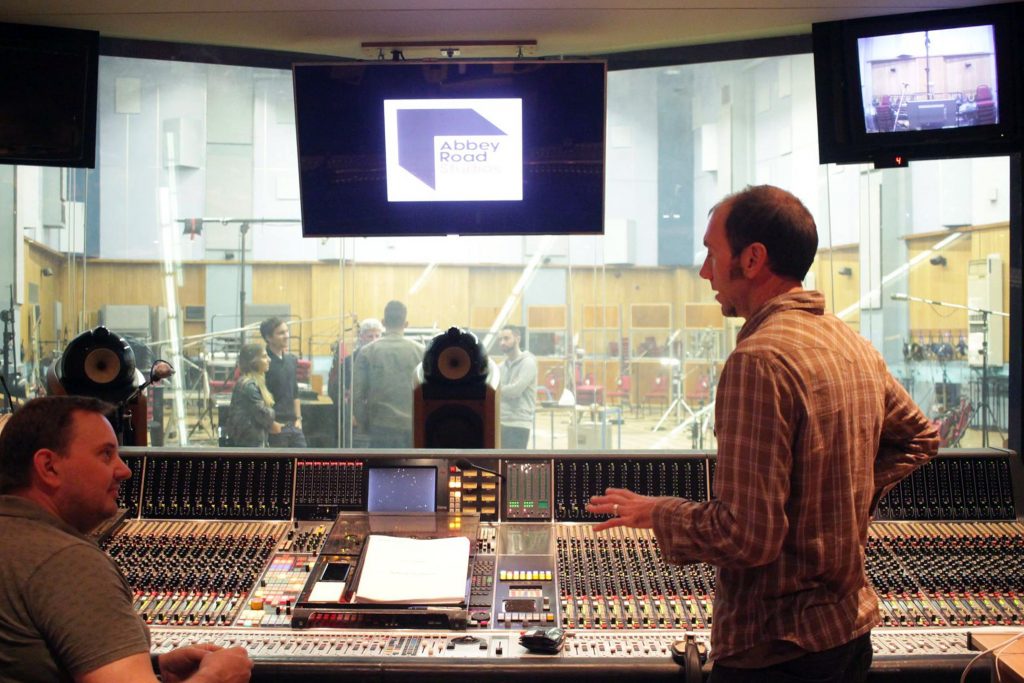 EPICOMPOSER: When writing music for an album that’s going to be recorded with live orchestra, do you still produce fully feshed-out sample mockups in your DAW or do you just sketch out the most important parts?

RLB: Not all do it this way, but I mock up every single note to be played and make it sound as realistic as possible, because you may need it here and there when it comes to mix time. Also I love the orchestration phase, and though I have little time these days to do the actual layouts in Sibelius, I make sure I have every section’s voicing exactly as I’d like it in the MIDI.

EPICOMPOSER: Trailer music world is changing constantly as you might know best. Is there a particular trend in sound or style that struck your ear recently – either in a positive or negative way?

RLB: Well, the trend of remixing popular songs into moody cinematic underscore has of course been everywhere. Done in the right away, it can be fantastically effective and quite artful. But at this point, I also see it being done just because it’s such a fad, and sometimes it misses the mark. Where something more subtle that musically supported the on-screen narrative could have been more effective.

EPICOMPOSER: Being a composer and multi-instrumentalist yourself, how do you typically go about creating a new track?  Do you have any particular techniques that help you get started, and what is your instrument of choice when it comes to writing music?

RLB: My best musical ideas come to me anywhere BUT in my studio.  Most of the thematic content in my work, is first sung into my phone at whatever random location I happen to be in when the idea comes.  And then I’ll sing in secondary accompaniment lines and describe chord progressions.  Then once I get to my studio, I start figuring out how to flesh it out and develop things. Even when I’m at my studio under a deadline, I don’t do much of the actual writing work at my keyboard. I have a funny habit of pacing circles around the table in the middle of my room and trying to figure things out in my head, then run back to the keyboard to lay stuff down, experiment with some variation, and then repeat.

EPICOMPOSER: Apart from composition, you also studied conducting in the USA, Netherlands and in Germany. How important is it for you to be able to conduct your own music for the orchestra and where do you see its advantages?

RLB: Conducting orchestral recording sessions is one of the most exhilarating things you can imagine and one of the great joys in my life. As far as recording session efficacy goes, there’s benefits and drawbacks. Standing in front of the orchestra I can quicker convey my intentions in the music. I can move faster, starting and stopping takes when I know there’s something I don’t like. There’s less communication between the booth and the stage necessary, which saves time. However the obvious drawback is that I’m not in the booth hearing exactly what is coming through the microphones which can be quite different than what is resonating in the air up at the top of the conducting podium. 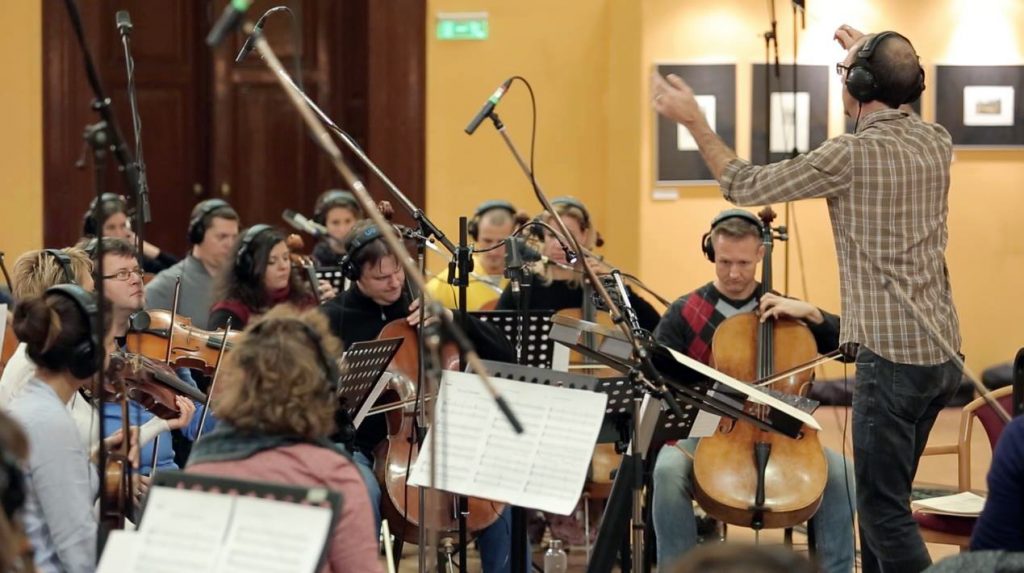 I’ll have to paraphrase Harry Gregson-Williams (Chronicles Of Narnia, Metal Gear Solid, Live By Night) on this one when I say that even though I’m aware I may be missing some quality issues that would only be audible were I in sitting in the booth… If that means my score is 5% less than what I’d hoped for… well I’m willing to sacrifice that 5% to have the experience of conducting my music. Sharing in that creative moment, together with the orchestra as a team, that’s why I’m a composer.

EPICOMPOSER: You recently invited renowned cellist and Hans Zimmer’s secret weapon Tina Guo (cellist on Batman V Superman, Inception, Sherlock Holmes) to your studio to play on several upcoming trailer tracks of yours. How was working together with her and how would your common writing process look like?

RLB: Tina is such an incredible talent. I’ve been fortunate to work with her on a few different projects. Honestly, working with her… just don’t do much and let her make you sound like a genius. My best advice I can give there. 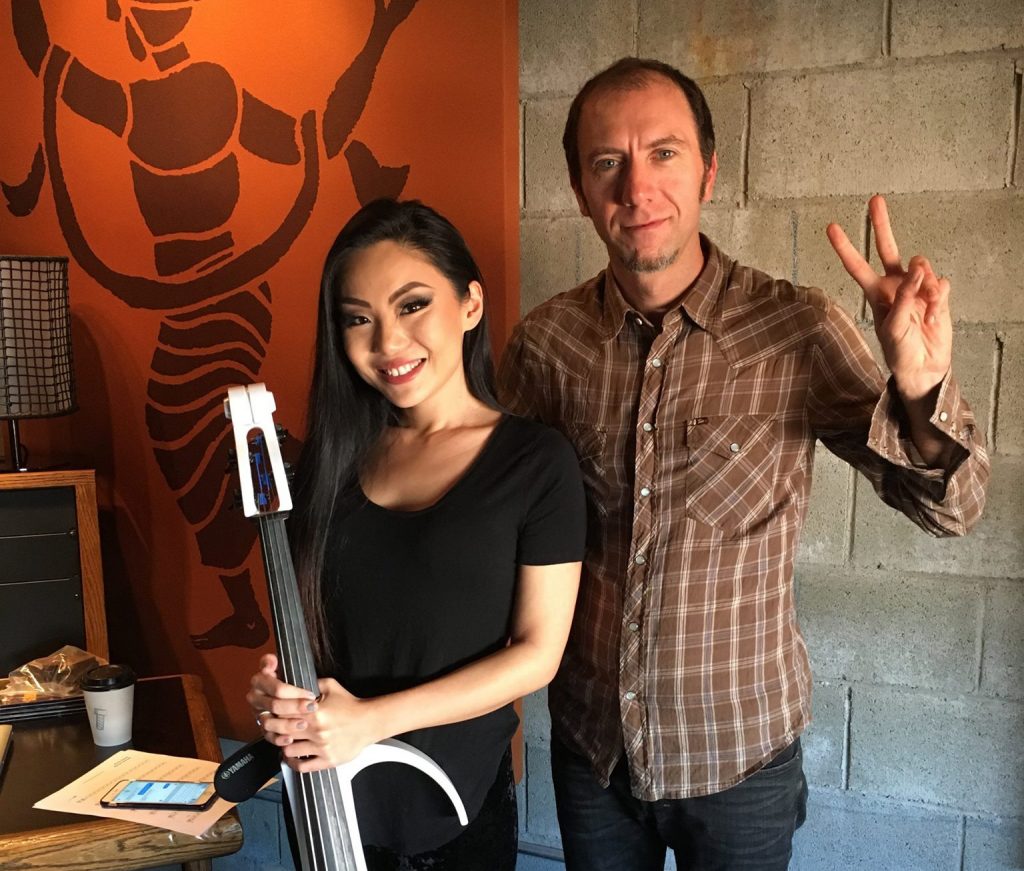 EPICOMPOSER: Talking about your studio, could you let us in on your favorite and most used tools, both analog and digital?

RLB: Well, there’s a software company called Output (Analog Strings, Substance, Signal) that was founded by my longtime studio neighbor and dear friend, Gregg Lehrman. I love their creative concepts in music production software and use their tools quite a lot. But my studio is largely designed for creating orchestral mock ups.  I don’t mix there, and rarely record there. So I don’t keep much for gear there.

EPICOMPOSER: What is the next project you’re most excited about?

RLB: I’m about to start in on an orchestral mischief/comedy album at GO+B, which I’m super pumped for. It’s such a great genre to show off what an orchestra can do.

EPICOMPOSER: I always like to ask this question last: Robert, which person – alive or dead – would be found at the top of your collaboration bucket list?

I’d love to write on a Paul Thomas Anderson (Editor’s note: director on Boogie Nights, Magnolia, There Will Be Blood) project. I love the way he explores the human condition in his films. Sometimes intensely beautiful and horrific all at the same moment. He often relies heavily on musics capacity for storytelling, and he takes great risks with what he lets music do.

That’s it for now! Again, Robert, thank you so much for taking the time to answer our questions! I wish you all the best for your upcoming releases and your endeavor to keep real orchestral music alive.

Read more interviews with amazing people from the industry.