Today we’ll have a thorough look at the product and see how well it performs in an everyday composing routine.

Dronar Live Strings is a sample library for Native Instruments’ full version of the Kontakt player and comes with roughly 10 GB of sampled content. It’s packed with a multitude of live string performances and effects that can be mangled, mixed and processed within the library’s own modular synth engine. Here’s a quick rundown on the product’s key features:

The base concept behind Dronar Live Strings is pretty easy to grasp and builds upon previous Dronar releases like Dronar Guitarscapes or the Dronar Hybrid Module: The library’s sound engine is composed of four layers, each one holding up to two samples/phrases/loops. Each layer occupies its own range in the sound spectrum, so the four layers spread up into Low, Mid, High and FX. Now, as soon as you hit anything from single notes to three or four-note chords, Dronar Live Strings automatically spreads out the notes you played across the four ranges, adds a root bass note, a high drone note and blends in evolving sound effects. Since every layer can be loaded with up to two sounds, you’re able to build patches made up from up to eight different sound sources.

As if that’s not enough already to create rich and complex sonic textures, Dronar Live Strings adds a whole bunch of modulation, arpeggiation and rhythmitizing options. These, in conjunction with an eight-layer sample set, allow for creating really expressive and evolving atmospheres well-suited to any cinematic genre.

PATCHES, PRESETS AND HOW TO USE THEM

Dronar Live Strings comes with a plethora of pre-designed patches and sounds you can use to get your creative juices flowing. These patches are organized into different menus and categories, some featuring more ambient, flowing drones while others provide you with shimmering, spinning rhythmic beds. This is what Dronar Live Strings’ preset structure looks like: 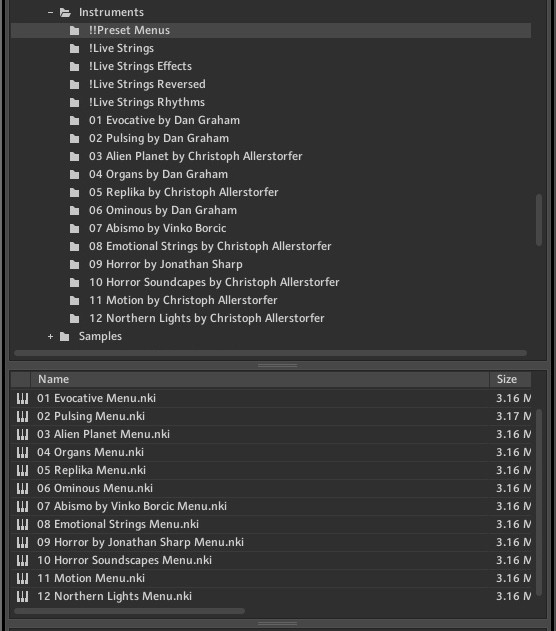 To get a good idea of the content available, it’s probably best to start with the !!Preset Menus folder (its content is visible in the picture above) since it contains all of the so-called menu patches. Loading up any of the twelve .nki files provides you with a selection of 12 drones from a specific category. Apart from categories like “Evocative”, “Pulsing” or “Horror”, you’ll also find a few menus labeled rather cryptically (e.g. “Abismo”) which you just need to have a listen to in order to get their sonic meaning. As mentioned before, each of these 12 menu patches includes 12 drones that are composed of eight sample loops each. They differ from each other through the selection of samples as well as the rhythmic or modulation effects they are treated with.

The lower region of the keyboard (in red) represents your twelve drone presets as so-called Drone Keys. Hitting different keys in this area lets you switch between drones instantly. The upper region on the keyboard colored in cyan is called Overflow Range and is there to catch notes you hit outside of the blue playable range.

As you might have seen, there are a lot more folders and patches available in Dronar Live Strings’ instrument folder. While these might appear a bit confusing at first, they are actually structured very well. The second to fifth folders from the top contain various traditional string techniques and articulations like staccato and pizzicato loops or tremolos. Those techniques and effects are again sorted into menus so you’re able to choose from different variations.

The folders starting from “01 Evocative” contain the same presets as their namesakes found in the “Preset Menus” folder with the only difference that now all the 12 pre-designed drones from one category are broken up into individual patches.

On loading up any of the 204 patches included, you’re greeted with a neat and tidy looking main interface. It doesn’t feature much more than a couple of rotary controls to dial in the amount of each of the aforementioned sound layers. Additionally, you’re able to control Intensity – which works somewhat like a global expression control – as well as the Movement of a patch. Movement lets you dial in the depth, the engine’s built-in arpeggiator has on the sound of the patch – ranging from a sustaining pad sound to a strong and shimmering rhythmic effect.

The three spectral layers Lo, Mid and Hi are pretty elf-explanatory, I guess, but the fourth one – labeled FX – may need a bit of clarification. Similar to the other three sound layers, the FX layer holds up to two samples that differ from the rest though – both in tone and texture. The samples available for the FX layer are atonal sound effects throughout and last for about 20 seconds before being looped back. This provides you with a nice kind of evolving fairy dust on top of your tonal layers. Lastly, the two smaller controls on the lower right control the amount of Reverb and Delay you can add to the overall sound. 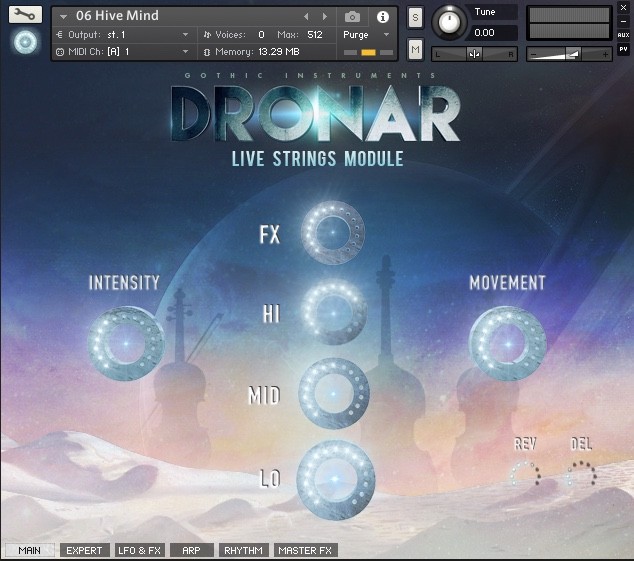 Dronar Live Strings claims to be both beginner and expert friendly, which is well-reflected by the GUI’s sophisticated structure. The library’s main interface is easy to use and provides you with the most important controls at a glance. Since you’re able to generate compelling and expressive textures with just one hand on the keyboard, you’ve got a free hand to control the interface’s sound dials either by mouse or MIDI controller and change the sound of a patch on the fly. Just by holding a chord and dialing back and forth some of the main interface’s layer controls, you already get fascinating results in literally no time.

Remember when I wrote about Gothic Instruments’ claim that Dronar Live Strings is meant for both beginners and experts? Well, we’re leaving the main interface now and see what’s under the hood of the library. As you might have expected, Dronar Live Strings offers a whole lot of modulation and processing options to shape your patches and let them come alive. By switching from Main View to Expert View by clicking on the little tab in the bottom left corner, we are led to the real core of the instrument. Here you’ll find a detailed overview of all the controls available and samples loaded into the layer slots. Clicking on any of the black slots activates a drop-down menu that lets you choose from all of the available string articulations and effects. Here, you can freely assign loops to the slots and blend between each pair by using the up/down slider besides. 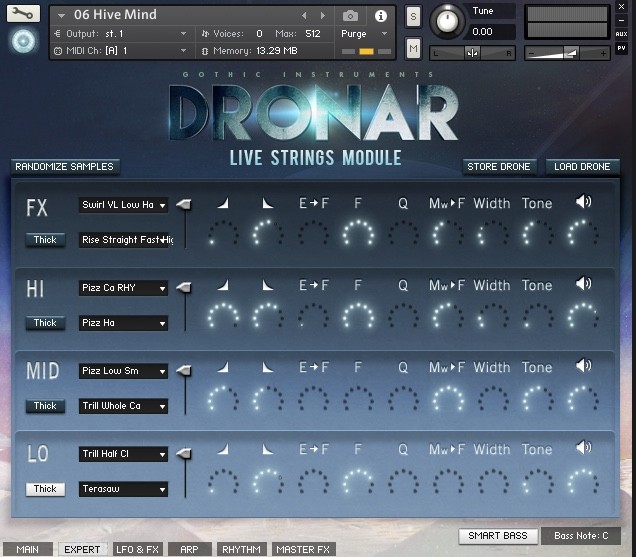 The Expert view also provides a multitude of controls like attack, release, filter cutoff, tone and level of each layer.

The following three tabs occupy the engine’s LFO, arpeggiator and rhythm editor which all serve the purpose of injecting movement and liveliness into atmospheric sounds. Apart from the LFO which affects all layers at the same time, the arpeggiator and rhythm editor can be operated for each layer separately. This way, you could for example give the low layer a steady quarter pulse while letting the mid and high layers swirl around with 16th arpeggios. Very nice!

The last remaining tab in Dronar Live Strings is the mandatory Master FX section. Like the name suggests, this is the place where you can activate and edit effects like delay, reverb, EQ and compression globally.

Obviously, going through each and every knob and slider would not only go beyond the scope of this review but is in fact already been done very well. Jamie from Time+Space did a remarkable walkthrough on each and every control of Dronar Live Strings which I’d definitely recommend watching for more in-depth information. Also, the product manual provides comprehensive knowledge about literally every question there could be on the library.

THE SOUND OF DRONAR LIVE STRINGS

Dronar Live Strings ships with a wealth of loops and samples performed by the Royal Liverpool Philharmonic Orchestra and comes with a numerous amount of presets for you to mess around with. I’d like to stress that most of those pre-made patches are expertly crafted and really showcase the possibilities and variety this library offers. For the scope of an ambient hybrid string type of generator, Dronar Live Strings leaves nothing to be desired. Taking a look at the source sounds, you’re given both traditional articulations:

as well as more unusual ones:

All of the string performances were captured with a live string band in Liverpool’s Parr Street Studio using two different mic setups (Close and Small). Two additional ambiences were generated in post production and add a concert hall and cathedral type of ambience. Every sample or loop therefore is available with each of those four ambiences, which definitely enhances the library’s tonal flexibility.

Although the majority of these loops and effects sound well on their own, the real magic happens when you start to combine, modulate and rhythmitize your pads. Going one step further, assigning automation to particular controls and modulators can take the traditional string sounds intro modern hybrid realm. Although you might think sonic options might be a bit limited when only using orchestral string sources, it’s surprising how many fields of cinematic mood Dronar Live Strings is able to cover. Depending on the base sounds or presets you choose, you can create anything from suspenseful, evolving pads to emotional, evocative atmospheres  and all the way to disturbing, scraping and screeching horror ambiences.

Dronar Live Strings is a remarkable collection of string-based cinematic ambiences and pulses. Its multitude of source material opens up a lot of tonal options and expressive colors from mystical, futuristic to downright horror. The library’s interface is pretty straightforward on the front but offers extensive customization and modulation options in the back to create unique and evolving ambiences. Dronar Live Strings’ smart scripting allow for easy playability with one hand while being able to modify tonal controls with the other. Taken together, Dronar Live Strings is a magnificent sound module that delivers versatile and evolving cinematic soundscapes. An inspiring addition to any composer’s toolkit.

Dronar Live Strings is available through Time+Space for a very fair price of $72.40. If you already own another edition of Gothic Instruments’ DRONAR series, you can save 20% on a new purchase.