BT Phobos is Spitfire Audio’s new poly-convolution synthesizer and the company’s first-ever standalone plugin on the market. It presents a new take on convolution-based synthesis aimed at composers writing epic, cinematic electronic and hybrid compositions. In collaboration with renowned composer and electronic trailblazer Brian Transeau alias “BT” (The Fast and The Furious, Monster, Lara Croft: Tomb Raider), Spitfire Audio put together a massive amount of source sounds that can be processed into a literally endless supply of cinematic rhythms, pulses, textures and atmospheres.

I had the chance to test this new synthesizer concept for the blog and will gladly share my insights with you in the following review.

For the first time in history of the British company, Spitfire Audio, usually known for producing top-notch Kontakt sample libraries, comes out with a standalone plugin synth. Opposed to “normal” synthesizers that generate sound through oscillators and filters, BT Phobos uses a convolution synthesis engine based on sampled source sounds. Phobos ships with a giant 20 GB sample library full of acoustic and orchestral material, massive analog synth sounds as well as organic percussion, electronic beats, micro rhythms and otherworldly sonic textures. Those can be shaped, combined and mangled further by sending them out to up to three distinctive convolution engines. This approach allows you to create uniquely evolving loops, patterns and textures that can be sculpted, filtered and rhythmitized.

Here’s a quick overview of BT Phobos’ most important features:

The concept for BT Phobos was born out of the ambition to create interesting and engaging cinematic sequences and textures that don’t sound repetitive or ‘loopy’. As Spitfire Audio states, they were in search of those “elusive sounds where the director asks for movement and a feeling of drive, yet subtly”. As if that’s not quite a challenge to accomplish, they surely didn’t stop there –  BT Phobos can also sound powerful, massive, driving and aggressive.

Let’s find out how this sonic variety is achieved by taking a look at BT Phobos’ futuristic interface.

BT Phobos comes with a very clean yet slightly cryptic interface that initially can be a bit overwhelming in terms of controls and functions. However, as soon as you get a grasp of the GUI – which happens quite quickly – you’ll recognize that Phobos is in fact pretty easy to control. Analog to the many channel strips on a mixing desk, the phrase “if you know one, you know them all” applies to Phobos’ sound modules, too. Nevertheless, I’d highly recommend having a look to the synth’s comprehensive manual and video tutorials to reveal the plugin’s full potential. BT Phobos can be divided into roughly four elements which I’m going to spotlight below.

Let’s start at the top! One of the two most important features of BT Phobos are its four so-called Source Units that are spread across the upper area of the plugin. Each Source unit can either hold a loop, rhythm or tonal sound loaded from Phobos’ huge sample pool. You can blend those four sources with one another and shape each sound’s envelope to your liking using the ASR filters. Most importantly though, you can send each sound to a freely assignable combination of convolution engines and that’s where the real fun starts!

Convolvers – The key to timbral expression

Now, how exactly do those convolution engines work? You can pretty much picture BT Phobos’ convolvers as a convolution reverb unit. You’d load up an IR (impulse response) of a room of your choice and send the dry signal of an instrument to it. The impulse response then wraps around the original sound and changes its texture to sound like it’s sitting inside the respective room you’ve chosen. BT Phobos’ convolvers work quite the same, yet differently. Instead of a room response, you load up sounds – in fact the same sounds you’d also load into the four source units above. This means, every source sound provided with BT Phobos can both be used as a synth sound or an impulse response. Since those impulses can either be tonal elements or rhythmic loops, the three convolution engines can change the texture and tone of a base sound drastically and add their own tonal or rhythmic elements to it.

Now, what makes Phobos convolution synthesis special, is that in a similar way to the source units, the convolver units are polyphonic. This means that for each key that triggers one of the convolver units a separate and new impulse response is created. This impulse response will be generated on the fly, which is what the developers mean by the “polyconvolution” engine in BT Phobos. 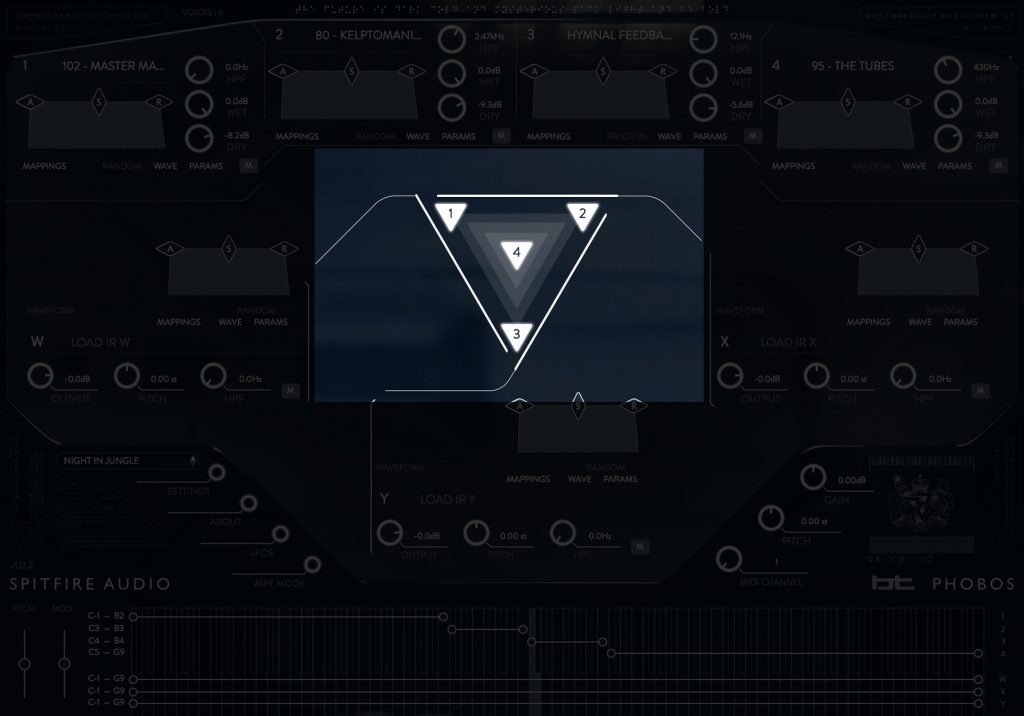 In the middle of the interface you’ll find BT Phobos’ heart and centerpiece – the Convolution Triangle. It works like a control matrix that assigns one or more of the four source units to different convolution modules. The little triangles labeled with numbers correspond to their respective synth module and can be drawn towards either edge of the big triangle. This assigns them to one or more convolution modules and feeds them with a certain amount of the source sound. You can either assign each synth sound to a different convolution pod or create individual blends in between. Depending on the blend of sounds or loops you’ve chosen as impulse responses, this mixture can take your base sound to a whole new sonic level and add things you wouldn’t be able to control manually. 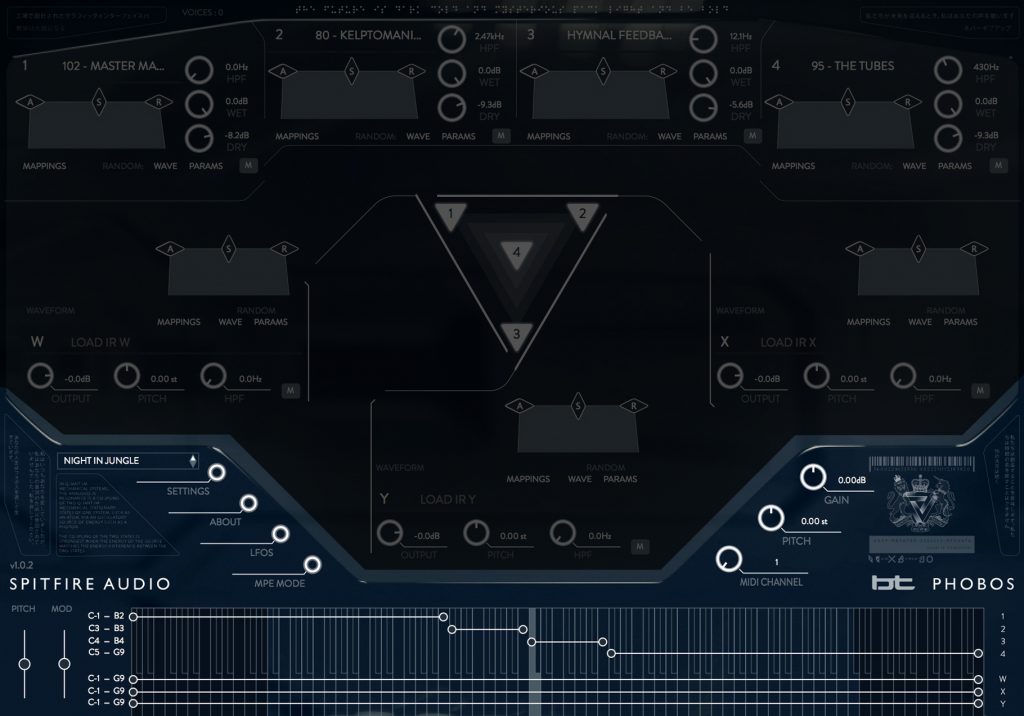 The Keyboard Range section found at the bottom area of the plugin’s interface specifies which range on the keyboard triggers which sound sources and impulse responses. With the range spread across the whole keyboard, all sources and convolvers are triggered by the whole keyboard, but with interesting placements, you can use the sources as triggers for the convolvers, or even separate different sounds onto different octaves.

The bottom area also features Phobos’ master controls. From here you can set the global volume and pitch of the instrument as well as access the plugin’s plethora of presets, settings and LFO assignments, which we will go over next.

BT Phobos provides you with four independent LFOs (Low Frequency Oscillators) that you can use to modulate just about every parameter of the plugins. The selection and setup of LFOs can be accessed by clicking on the respective button on the lower left side of the master controls. Spitfire Audio just released a short tutorial on this very aspect of Phobos. 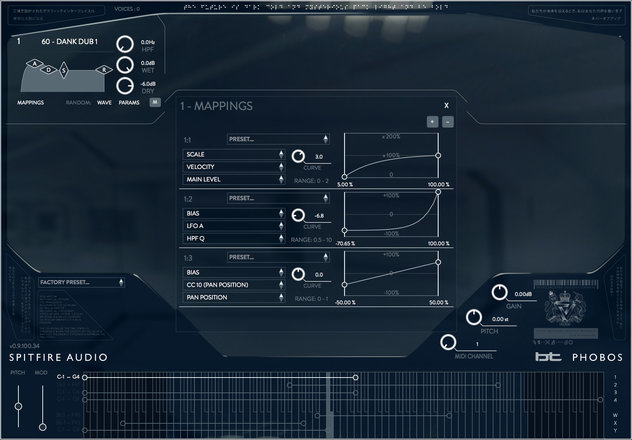 Automation Mapping is another important part of BT Phobos. Both the four synth modules as well as the three convolution modules feature elaborate mapping menus that allow for assigning modulations to a multitude of parameters. Those modulations can be controlled either via automating up to 4 independently configurable LFOs or by assigning parameters to your MIDI controls. Additionally, you can access almost every single parameter of Phobos from your DAW’s own automation panel and draw in elaborate automation curves. These modulations are key to creating evolving and moving synth patches. Fortunately, Spitfire Audio provided a good deal of modulation presets that help to get you going. Automation mappings are accessible by clicking on any module’s “Mappings” button located below the ASR curves.

BT Phobos is a remarkable, multi-faceted tool. Although I was quite intimidated by the seemingly complicated GUI at first, I quickly got the hang of it and was able to dive deeply into sound creation. After playing around with some of the amazing presets that come with Phobos, I quickly felt inspired to create some sounds of my own. I kept on just loading up sounds and loops into the four engines, choosing from practically random categories. Then I mixed and stacked them together and was instantly presented with already fascinating pads and pulses – without even touching one of the convolvers or LFOs.

Taking those into the equation, I quickly got lost in experimentation mode and probably spend hours just loading, tweaking and modulating sounds. With the aid of Phobos’ interactive GUI, I was able to create anything from driving, big percussive rhythms to tiny, microrhythmic loops that constantly change over time. In my opinion, this constant change is exactly what makes Phobos special. Just by adding one or two convolvers and some subtle modulation, you can create sounds that never feel repetitive or like they belong to an eight-bar loop. By using Phobos’ sound sources smartly, you can add a tonal dimension to rhythms and enhance plain, sustaining synth sounds with a rhythmic feel.

Because of the wide tonal and sonic variety of the source sounds, some preset patches of Phobos are slightly on the quiet side while others come out much too loud and overdrive the channel, especially when playing more than one key. Although you can always adjust the plugin’s overall output level with the master control, Spitfire Audio might think of a way to rein in some of the more serious dynamic differences in a future update.

Another thing I found a bit irritating was the fact that you aren’t able to add IRs of your own. While the huge, magnificent sounding 20 GB library of source sounds will probably keep you busy for years to come, I somehow expected the synth to be constructed a bit more “open-minded” – similar to something like Spectrasonics Omnisphere. The only reason I can imagine why you shouldn’t be able to load up your own samples, is that the internal polyconvolution process may be more complicated than just throwing a single IR on it.

THE SOUND OF BT PHOBOS

BT Phobos is a bit like the Jackyl & Hyde of synthesizers to me. You can create wonderful, percolating and shimmering sounds that weave around your cues and give them an understating feel of momentum. At the same time you’re provided with those big and bad, sometimes nasty sounds and loops that can just as well work as the dynamic centerpiece of a track. You can use everything from bold rhythms to micro-rhythmic figures in order to stimulate the tonal impulse responses, turning them into changing and evolving pads and pulses.

Regardless of the synth’s sonic variety, BT Phobos features a kind of overall sonic texture or trademark style that can be found on almost any patch. Most of the instrument’s patches carry a very distinct type of hybrid/electronic, industrial mood across, that sometimes reminds me of the dark synthetic textures of Trent Reznor and Ross Atticus (Boston, Gone Girl, The Social Network). Obviously, the musical style and sound collection of electronic producer and composer Brian Transeau is most responsible for this. It will be exciting to see if future addons to Phobos will also feature other artists or styles which can then be mixed up and layered with others.

BT Phobos offers anything from fat, subby analogue sounds to small, molecular, subtle pulses. Its elaborate interface allows the user to transform and evolve their sounds into cinematic rhythms, lush pads, ambiences and driving rhythmic figures. Although you can achieve compelling sounds by just mixing and layering the synth’s four sound engines, the real fun starts when you put Phobos’ convolution engines and modulators to work. The huge bulk of source sounds you’re given will keep any sound enthusiast busy for a long time and provide you with literally endless amounts of combination options. Some of the plugin’s pre-designed patches are still a bit unbalanced in level at the moment, but I’m sure the diligent guys and gals at Spitfire Audio will find a fix for that on a future update.

Phobos is a magnificent sound design tool with boundless amounts of sonic options and will present just the right cure for composers, who want to give their tracks a unique sense of motion and drive without relying on the ever-apparent string ostinato.