With Espressivo, Sonokinetic expands their renowned range of phrase-based orchestral sample libraries and adds a cinematic toolkit inspired by the musical style of iconic film composers like Jerry Goldsmith (Alien, The Omen) and Bernard Herrmann (Psycho, Vertigo).
Among others, those composers are particular known and loved for their unique and expressive way to create musical tension and excitement – hence the name of the library.

Espressivo promises to offer unique orchestral performances and effects that are impossible to replicate with other multi-sampled instruments. Let’s jump right in and find out how this brand-new sample library gets on.

Espressivo is a Kontakt library that is comprised of 4 orchestral sections, each one presenting its own effects and specialties. The sampling process took place with over 100 musicians, including:

With each section – strings, brass, woodwinds and orchestral percussion – Sonokinetic sampled a very distinct set of performances and phrases which would then be broken up into low to high registers. Although the four orchestral sections were recorded separately, the room in which all sections were captured glues them together nicely. Furthermore, you get 4 microphone positions to choose from which you can blend to taste.
Espressivo requires Kontakt 5.1 and will work with either the free or full version of the software sampler.

In style and function, Sonokinetic Espressivo presents an interface that is based on the brand’s recent sample libraries Maximo, Capriccio, Sotto and Minimal but it presents some interesting new features tailored to the product’s cotent.
While former Sonokinetic libraries provided a separate patch for every orchestral section, Espressivo comes with a single NKI that includes them all in one.
As always, the library is delivered both in 16 Bit and 24 Bit as well as with a Lite version featuring fixed microphone positions. This ways you can select the depth of tonal options and samples according to your CPU’s specs. 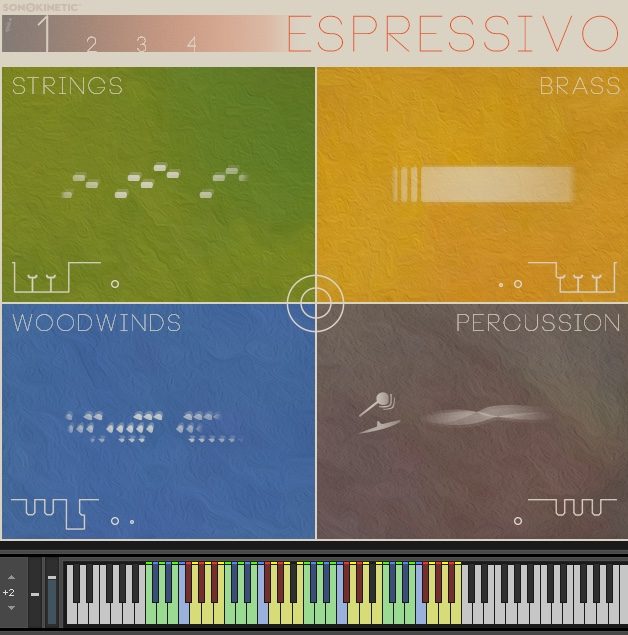 The interface of Sonokinetic’s Espressivo is separated into four colored blocks representing the aforementioned orchestral sections. You can find these same colors on Kontakt’s keyboard display, showing you what key triggers which section.
The phrases of the orchestral sections are divided into a low, low mid, high mid and high range, with each section providing three phrases per range. This equals up to 12 controllable phrases per section or 48 usable phrases in total.
Of course, this is by far not all you get. By clicking on any section, you gain access to the Phrase Picker Menu featuring all the available phrases. Each section provides a plethora of performances and effects that are roughly categorized into folders like “Pads”, “Rhythmic”, “Melodic” or “Stabs”. Those folders again are subdivided into even more distinct sub-categories including “Moving” “Continuous”, “Broken” or “Rolling” articulations. By clicking on any of the triangles located next to the phrase graphics, the library’s engine plays back an audio preview of each performance for you. 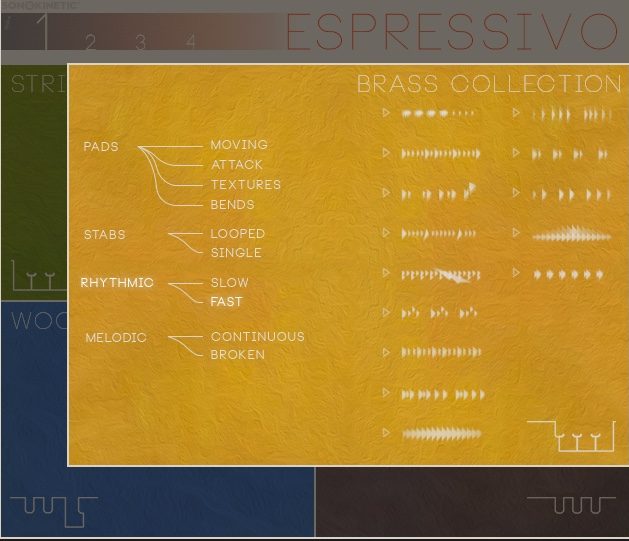 You see, there are lots and lots of combination options to choose from that work really well together most of the time. In Expressivo, you’re able to equip up to four fully sectioned phrase menus. You can switch between them manually by clicking on the large number in the top-right corner of the interface.
A handy little gimmick that’s already been featured on previous libraries of Sonokinetic, is the randomization option which is accessible by clicking on the “O” of the Espressivo logo. It arms the four section blocks with randomly chosen performances that sometimes can yield very interesting results when played together.

Getting back to the main interface’s functions, you find two circles sitting in dead center of the GUI.  As you might know, at Sonokinetic, every little element has its purpose and so does this bulls-eye control. Clicking on the inner circle triggers a master control popup which lets you change parameters like tuning, panning an volume globally. The outer circle features Espressivo’s microphone control. Clicking on it provides you with a selection slider, that lets you blend seamlessly between two of the four available mic positions. It would have been great being able to blend between all of the four positions at once – much like the mic control Spitfire Audio’s orchestral libraries are offering – but I guess that would have issued a serious effect on the library’s performance. 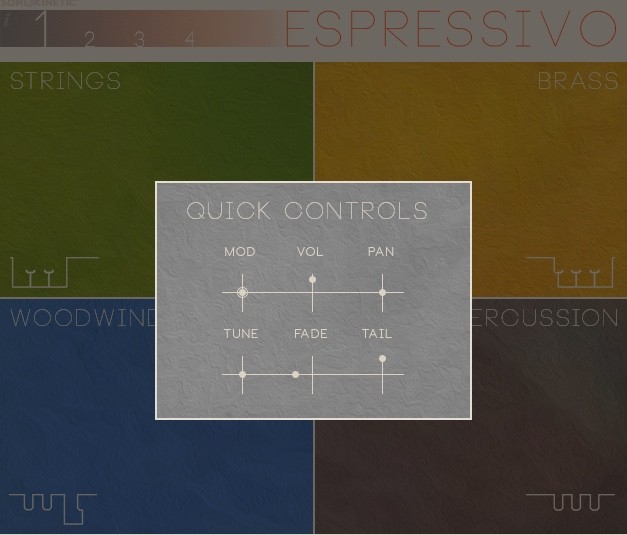 The last feature I’d like to mention is Sonokinetic’s nifty Score View which is present in their more recent libraries, too. Clicking on the second “S” of the Espressivo logo will lead you to the respective display. Depending on the key you press on your MIDI keyboard, the Score View displays the according notation of the performance so you can see exactly which instrument is playing what. Though this feature wouldn’t be absolutely necessary, it represents a horrendously useful learning tool for aspiring composers and orchestrators.

Although Espressivo comes with quite an elaborate interface that has a lot of customization options, it’s quite easy to get your head around the instrument – especially if you have used one of Sonokinetic’s phrase-based products before. Also, Espressivo features both a set of useful on-screen hints as well as a comprehensive manual that should clarify most issues you might run into along the way.

Each phrase comes with a release tail that rings out in the concert hall after you let go of the key. This really helps to glue phrases together and provide a realistic ending to a phrase.
The sampled hall’s reverb tail sounds quite controlled and dies off quickly but sets the instrument sections in the right sonic space, nonetheless.
Speaking of sonic spaces, it’s probably good to know that Espressivo nicely blends with other phrase-based libraries of Sonokinetic like Maximo, Capriccio or Sotto, assumed they were recorded in the same concert hall. When combining Espressivo with orchestral sample libraries of other brands though, I’d suggest assigning them all to a subtle common reverb in order to help glueing all the sections together.

As with Sonokinetic’s other orchestral libraries, the sections for Espressivo were recorded in situ, meaning that all the instruments were captured at their standard position in a symphonic orchestral setup. This, of course, adds massively to the “blendability” of the library with other sampled orchestral products.

Although not all phrases lock to a specific rhythm, all of Espressivo’s performances were captured at 130 BPM. However, not only does the library’s smart scripting synchronize the phrases to your host’s tempo, it also automatically doubles or halves their playback speed at extreme tempo settings – provided you turn on the interface’s ITM (Intelligent Tempo Mapping) control. As far as I have experienced, the library does quite a good job of tempo-stretching or -compressing phrases without introducing too much noticeable artifacts in a range of roughly 20 – 30 BPM around the 130 BPM center.

Now, in a couple of other product tests I read people complaining about the absence of proper chord or tone keyswitches to change the root key of phrases. Honestly, I wasn’t really bothered by this “missing” feature since most of Espressivo’s phrases are atonal – meaning not related to any specific key – anyway. So if you think about that, programming chord progressions isn’t really in the scope of the library. However, in case you want to fine-tune some of the more tonal performances of Espressivo to a specific key, you can accomplish this by making use of the Adjustments Panel’s “Tune” slider.

Espressivo’s expertly sampled range of atonal phrases and effects covers a remarkably wide spectrum of sounds and combination options that can hardly be achieved by using standard orchestral libraries. As with their other phrase-based libraries, Sonokinetic again manages to interweave design and function with their unique, well-programmed interfaces that help boosting creativity and the library’s ease of use.
Certainly, Espressivo might not be the right thing for you if you’re looking for a broad brushstroke all-round orchestral sample library. However, if you’re in search of exciting and suspenseful orchestral colors and effects that uniquely spice up your next action, horror or thriller cue, there’s hardly any match for Sonokinetic’s Espressivo in terms of authenticity and tonal options.

Espressivo accomplishes to represent a faithful and diverse homage to the compositional style of Hollywood score icons like Jerry Goldsmith and Bernard Herrmann. Even more than that, Sonokinetic successfully managed to transfer this stylistic gem of the golden era of film into the 21st century. Definitely a valuable addition to any orchestral composer‘s toolkit!
Espressivo is available for €249 / $271 through Sonokinetic’s online shop.

Oh, by the way: Sonokinetic now offers various discounts on Espressivo for owners of other libraries of the brand!