The number of orchestral libraries has been growing steadily for the few last years and the inherent innovation in this sector seems to be closely connected to the sheer quantity of recorded samples. With a huge arsenal of instruments, split into numerous articulations, you can create detailed scores and arrange your instruments in a way that the resulting track sounds incredibly realistic. There is a downside to these huge orchestral libraries, though: arrangements can become cumbersome and slow, the ease of simply sitting down in front of your keyboard and playing a few notes is often replaced by tedious programming and amendment of MIDI-data.

The Germany-based label Sonuscore tries to fill this gap with its KONTAKT Player library ‘The Orchestra’, a VST that, in their own words, constitutes “the easiest way to compose epic orchestral music“. Released in mid 2017, Sonuscore now has upgraded ‘The Orchestra’ to version 1.1 and in this review, we take the opportunity to have a look at the improvements and additions as well as the library as a whole.

As we all know, arranging for a symphonic orchestra is no easy task. Sonuscore tries to simplify the process and has developed a unique approach to improve the creative flow when composing epic soundtracks. The library consists of two major ‘scopes’, that tackle different needs of a struggling composer and complement each other in a delightful and surprisingly seamless manner. 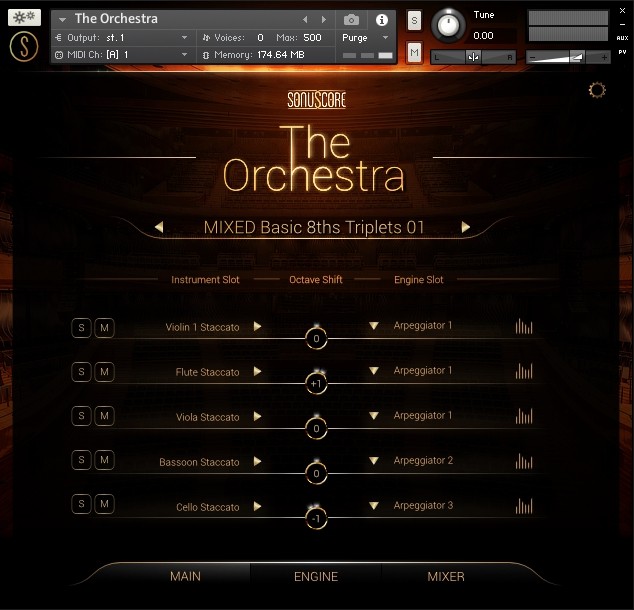 The unique selling point of ‘The Orchestra’ is the first scope – an almost casual approach to arranging an 80 player symphonic orchestra. Instead of presenting the overwhelmed user with a multitude of different instruments, it merges the orchestra into a single instrument and lets you choose pre-made phrases and rhythms. By changing articulations and volume of each instrument with a mouse click, the color and tone of the ensemble is easily modulated.

Don’t get me wrong. These are no pre-recorded phrases, but each instrument is connected to an elaborate arpeggiator that triggers the articulation of an instrument. In addition to that, you have envelopes at your disposal to program the dynamics. All phrases are essentially programmed patterns that react to your MIDI-input intelligently. And every pattern can be customized to your liking. 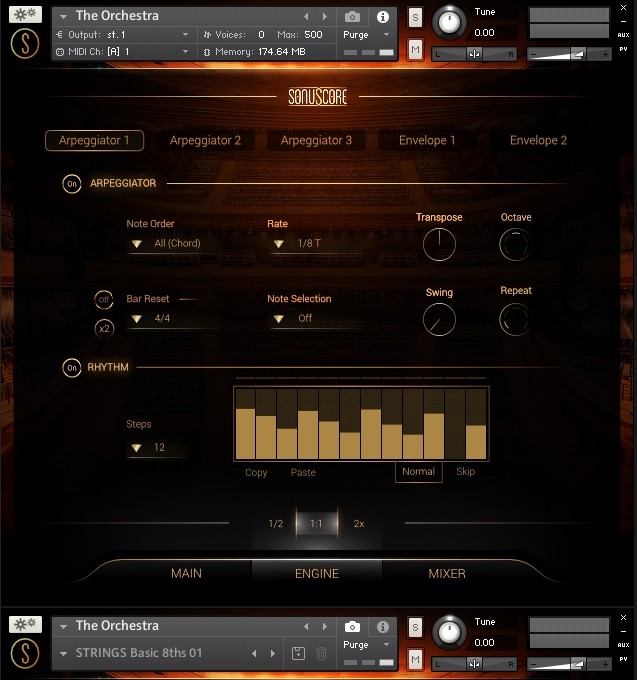 The second scope is the composing of orchestral instruments in the traditional way – having all the articulations like staccato, legato, sustained and portato laid out individually for strings, brass, woodwinds and percussion.

As a classical composer myself I am somewhat sceptical towards pattern-based orchestral arrangements. They often turn out to be too inflexible and repetitive. To be honest, when working with libraries that have these pre-recorded phrases I tend not to use them. However, with ‘The Orchestra’, this was different. I wondered how I could convey my growing enthusiasm when working with this software – and I figured a proper example would serve this purpose best.

I used this simple three-voice-cadence and fed it to ‘The Orchestra’. What you hear in the example is one instance of the library with different patches from the Animated Orchestra. All three following examples play the same simple MIDI sequence you can see above as score.

EXAMPLE 01 – Animated Orchestra [Discovering The Past]

This is just playing with the shipped presets – without tampering in any way with all the possible settings you could change. The Animated Orchestra and, in a simpler way, the Orchestral Rhythms are a fantastic way to compose harmonic sequences with the satisfying sound of a full symphonic orchestra. And the thing is: These patterns are really good. What I mean is that this is not only a nice toy to play with and afterwards you’d have to arrange your score in the traditional manner. No, these patterns are well crafted and can easily be combined with solo instruments that are customized in detail.

‘The Orchestra’ gives you the ability to work with a versatile, customizable pattern-based layer and add your solo instruments on top of it – a workflow that can be surprisingly intuitive and satisfying.

The free update implements several useful additions to ‘The Orchestra’. User Presets of patterns can now be saved, exported and imported. Due to popular request, triplet patterns were added in Orchestral Rhythms and in the Arpeggiator. The main UI now has additional mute and solo buttons for convenience. In the Settings you will find new customization options for controllers and a humanize-button to add random parameters to the engine. The newly introduced separate outputs for instruments will improve your workflow in mixing. And on top of that, an entire new instrument, the Glockenspiel has been added to the library.

Of course, the aformentioned disadvantages of pattern-based orchestral music are still legit. When you arrange more than just a quick sketch (like in the examples), you will have to invest some time into diversifying your patterns. The most beautiful and elaborated pattern will be boring after having been played over and over again. You don’t want your track to consist of the same rhythmical sequence from start to finish – and sometimes you may not even need the patterns after all…

Another thing is the percussion instrument. With timpani, a Taiko, Toms, Bass Drum and Cymbals the percussion runs a bit short compared to the rest of the instruments. It feels a bit like a forgotten section of the orchestra and can’t compete with the diversity of strings, woodwinds and brass instruments.

With a price tag of $399 The Orchestra resides in the mid-range level of orchestral libraries. Its unique approach to pattern-based composition and the well executed UI are highly satisfying. Be it for quick musical notes or full orchestral arrangements in detail, this library is an excellent tool to carve out your next epic score. Find an additional library for percussion and you will be prepared for both musical prove-of-concepts as well as finalized orchestral arrangements.

Sonuscore’s The Orchestra is available through the Best Service online store.