Founded just recently in 2017, Red Room Audio has already released several very interesting virtual instruments, including their most ambitious project up to date: Palette – Symphonic Sketchpad. This extensive bundle of orchestral instruments has now been updated to version 1.1 and we will delve into the depths of this remarkable tool and its three extensions – with the clear intention to find out what it can do and who should be using it…

The first impression that strikes when looking at Palette is its sheer quantity. Orchestral libraries these days try to integrate additional instruments and sound FX to present the composer with a maximum of creative tools and extend the product’s usability. Today’s cinematic music doesn’t solely rely on the sound of the orchestra alone, but frequently incorporates elaborate sound design elements used in trailer music like braams, whooshes, epic drums hybrid FX or synths. Knowing this, it’s not unusual to find several orchestral instruments that try to include these aspects of modern arrangements into their orchestral library portfolio. Red Room Audio, as it seems, has internalized this concept and took great care to deliver an extensive ensemble of instruments and equipped them with an equally substantial repertoire of effects. 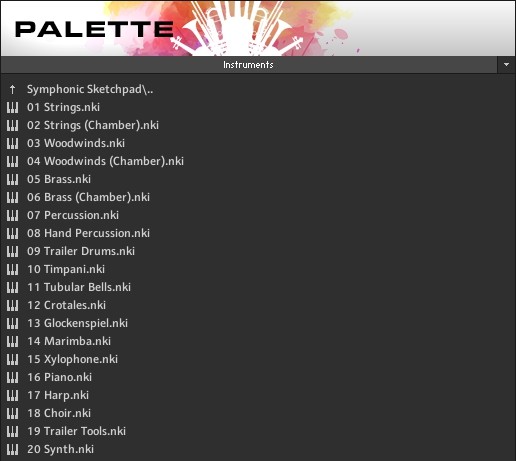 The main library consists of 20 instruments, each with 3 mixable microphone positions (close, decca tree, hall) and up to 8 (!) articulations. These include legato, sustained, marcato, tenuto, staccato, spiccato/staccatissimo, pizzicato (for strings) and trills. Also, you can adjust Dynamics, Round Robins, Vibrato and Tremolo/Flutter. In addition to that, each instrument can be modulated with several of the 19 included effects, e.g. Reverb, Distortion, Screamer, Equalizer, Compressor, etc. These processors are no external VST plugins, they are powered by KONTAKT’s built-in FX engine and can be accessed right from the library’s main interface.

Palette Symphonic Sketchpad could be called the Swiss-Army-Knive of epic orchestral libraries. Red Room Audio went all the way to create an one-stop toolkit for digital composers, where you have all your classical instruments (strings, woods, brass, piano, harp, choir) at hand, but also have access to less typical instruments like Hand Percussion, Crotales, the infamous Trailer Tools and Synths. All of that is not only available for the full version of Kontakt, but also for the free Kontakt Player. 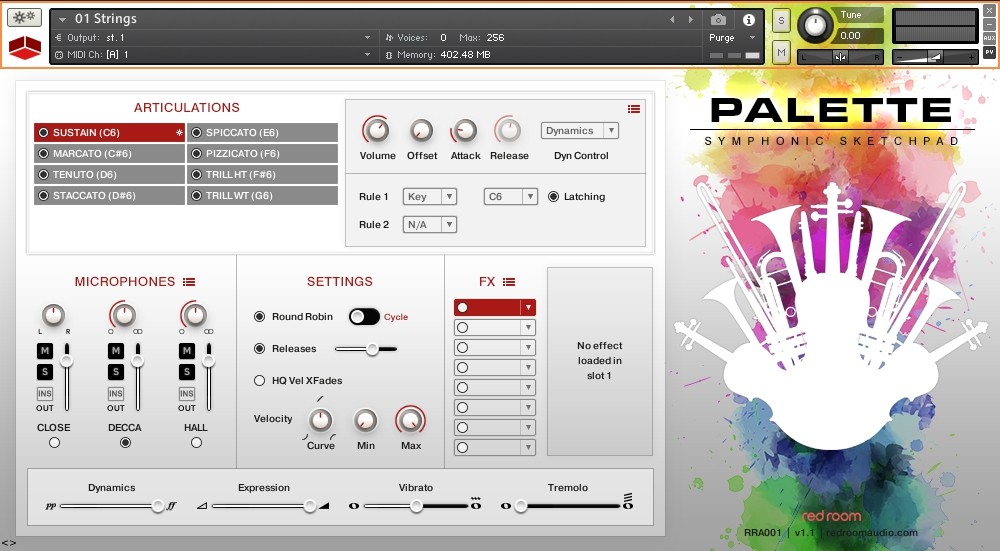 While writing this article I somewhat struggled with the sheer quantity of features I felt I should be considering when reviewing the instrument. The article would go on forever and would probably be boring as hell, so for those interested, I included a video walkthrough of Palette’s features hosted by its developer Dickie Chapin. This video clip demonstrates the numerous possibilities of tweaking your sound much better than I could writing about it. Rather than mentioning all the technical possibilities, I decided that this review’s focus should lie on my experience concerning the creative process and workflow I encounter using the Orchestral Sketchpad – because a Swiss-Army-Knife might not be for everyone…

I have to say, I find the title “Symphonic Sketchpad” somewhat misleading. The term “Sketchpad” for me is connected with a simple, fast process that needs little to no attention to technicalities but features a playful focus on making music. The result may sound a bit rough but you are getting there fast – that’s a sketch in a nutshell. For me, anyways.

I can’t say that my experience with Palette reflects this “sketched” feeling. When I launched Palette and loaded the first instrument into Kontakt, I felt like the sound was a bit too harsh and somewhat blunt. As I worked my way through the numerous buttons and switches I noticed that this has to do with the default settings, particularly with the Mic and Dynamics settings. I found myself changing these two settings every single time I loaded a new instrument in order to breathe life and a realistic sound into my patches. Fortunately, with the recent 1.1  update of Palette, you can now save and load your preferred settings, which is nice, but still cumbersome as it forces you to organize and load a bunch of cfg-files.

These few additional mouse clicks may not bother you as much as me– but I think, if we are talking about a “Sketchpad”, you should be able to load an instrument and instantly be able to start playing. When loading up a patch in Palette, it seems like you get the raw version of it and you will have to tweak the instrument until it fits your overall sound. While this approach offers a large spectrum of tonal flexibility, the endless possibilities of changing your instrument, adding effects and selecting articulations, tweaking mic positions and velocity envelopes just feel a bit overwhelming to me and it’s probably the same for composers who just start out writing orchestral music.

Red Room Audio offers three expansion packs for Palette – Symphonic Sketchpad, each priced at $199. Brush Pack 01 – features a broad collection of nicely playable Solo Instruments and Combination Patches and is – in my eyes – a worthy addition to the full and chamber ensembles of the main package. 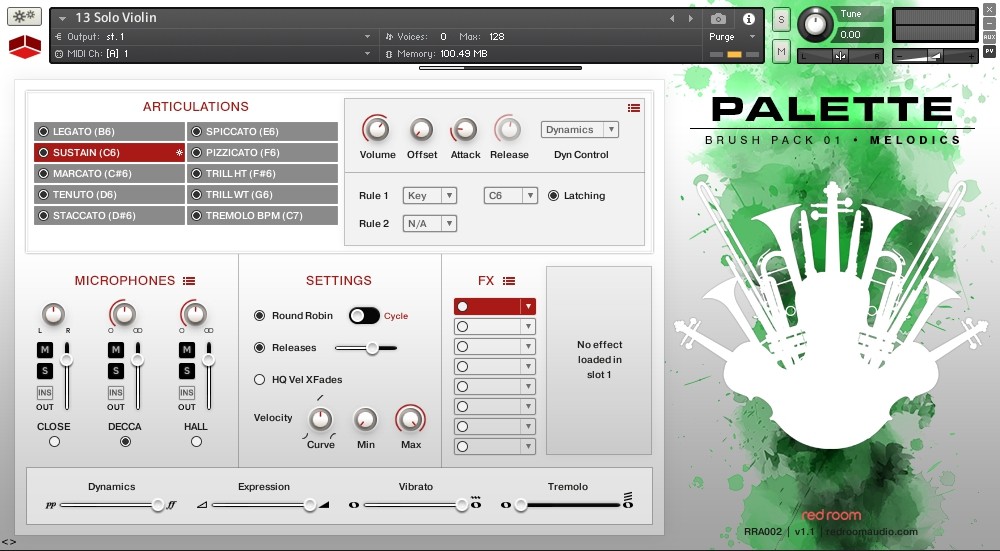 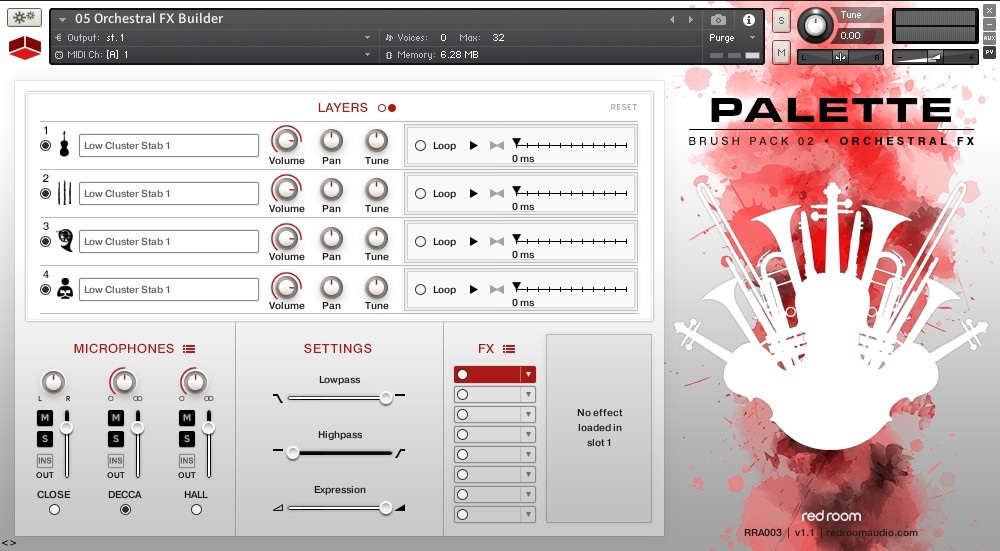 Brush Pack 03 – Runs is a handy collection of harmonic and diatonic runs which even can be imported as MIDI data into your DAW. This makes it a tremendously useful extension for creating convincing string and woodwind run transitions. Since the Brush Packs are consistently programmed the same way as Palette, they can be combined and mixed very easily.

Despite the slightly misleading title, with Palette – Symphonic Sketchpad Red Room Audio really offers a unique and overarching collection of orchestral instruments. If you are looking for a tool with a wide range of musical possibilities that focuses on modern epic orchestral arrangements and provides extensive effects as well as a careful selection of additional sound design and synth patches, this library could be just the right thing for you. With a price of $299 for the main package you get a well-crafted, consistently programmed Kontakt library that admittedly requires a bit of work, but rewards you with in-depth customization options and a very cohesive sound.

The three Brush Pack extensions are $199 each and are – just like the main library – available through Time+Space or directly via Red Room Audio’s web store. If you buy 2 Palette products, you get 5% discount off both, buying 3 products gets you 10% off and buying all 4 products gets you 15% off the price.