After the success of their first two trailer sound effects libraries Evolution: Dragon and Evolution: Atlantica, Keepforest is back with another SFX pack, filled to the brim with cutting edge trailer sounds. With the Vikings Bundle, Keepforest explores the sonic world of Scandinavian mythology and delivers a tonal palette full of metal, grit and raw power.

In the course of Audio Plugin Deals’ two-week 66% Vikings Bundle discount I checked out the two libraries for Epicomposer and will share my experience with you in the upcoming review.

A SONIC JOURNEY TO THE VIKING AGE

Keepforest’s Viking Bundle is composed of the two stand-alone libraries Vikings: Cinematic Hybrid Punk Folk and Vikings Expansion: Metal Cinematic Toolkit. While the names of these products explain their content pretty well, let’s have another quick look at the overall theme and inspiration behind the creation of the Vikings Bundle.

Not just since high-flying blockbuster series like Game Of Thrones or Michael Hirst’s Vikings, northern mythology and the dark medieval times are ever-present topics of the film entertainment world. Going along with these war-ridden times shaped by elemental forces, fantastic beasts and raw metal, there’s a distinct sonic landscape you would expect from such a franchise. Speaking of metal, there’s also a huge palette of rock and metal bands like Amon Amarth or Enslaved focusing on northern mythology and the viking ages that also characterize the sound we associate with the term “Vikings”.

Since they found that there’s not a complete sound effects library on the market that truly covers this topic, Keepforest gathered their roster of professional musicians, sound designers, and audio engineers to create a comprehensive collection of trailerized organic sound design elements, strings, percussion and electric guitars.

Now that the stage is set, let’s have a look at what you get with the Vikings Bundle.

The two libraries Vikings: Cinematic Hybrid Punk Folk and Vikings Expansion: Metal Cinematic Toolkit carry over 22 GB of samples in high-quality 44.1kHz/24bit resolution. Both products are playable with a full version of Native Instrument’s KONTAKT Player (5.1 and above) but also come with their own WAV sample folders, should you prefer to drag the sounds into your project as audio files.

Apart from a variety of sound design elements like booms, downers, hits, risers and benders, Vikings: Cinematic Hybrid Punk Folk features two brand-new engines called Pulse Designer and Strings Designer. We’ll have a look and listen into these in a second.

The Metal Cinematic Toolkit Expansion is focused more on the instrumental side of things featuring 3 cinematic metal guitars plus riffs, 3 electric basses, 3 drum kits as well as synthesizer samples and hybrid pulses.

Here’s a rundown of samples and patches you’ll get with the Viking Bundle:

Vikings: Cinematic Hybrid Punk Folk comes with a wealth of organic, digital and hybrid trailer sound design elements, including hits, booms, braaams, fills, risers, downers and much more. These sounds are housed in one of the more straightforward interfaces of the multiple ones included with the Viking Bundle. Upon loading, you’re presented with a new, photorealistic GUI centered around what I suppose is a stylized sword and shield. Especially if you own any one of Keepforest’s previous libraries, you should get along quite quickly. 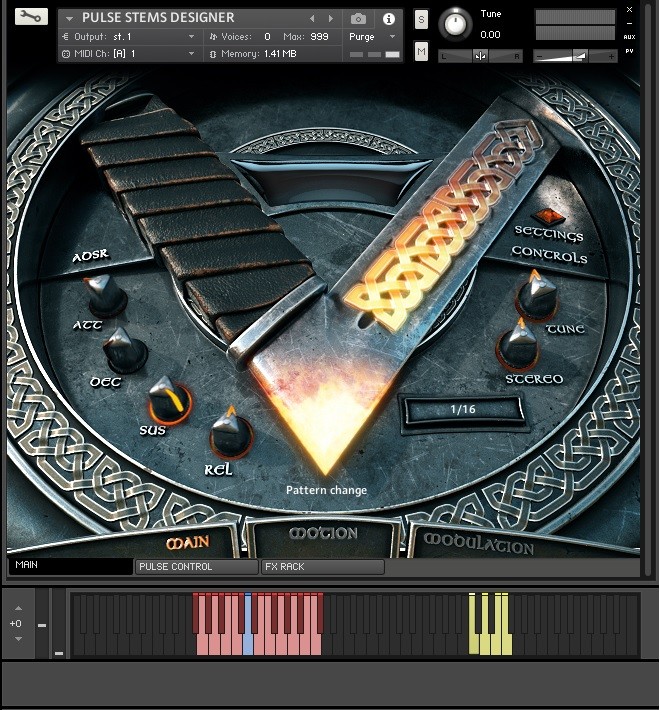 On the left, you’ll find Attack, Decay, Sustain and Release dials to shape the samples, while on the right, you’re able to control the tuning and stereo width. Via the Settings button, you’re directed to a new window that enables you to make further adjustments depending on the patch loaded. Another useful feature is the yellow marker found at the waveform display at the top. It allows you to set the start position of a sample, which sometimes is an unavoidable necessity as a couple of samples got rather long portions of silence at the beginning. This is probably a bug that should be addressed in a future update.

The “big knob” global FX feature introduced by Keepforest’s Evolution series is missing this time, but in return you get a fully fledged FX page accessible via the FX RACK tab at the bottom of the interface. The FX rack allows you to stack and mix up to 8 different effect units hosted by the KONTAKT engine. These effects include standard processors like EQ, compression and reverb as well as more destructive effects like distortion or bit crushing. Nice feature: you can save and load any FX rack you created ony any patch. 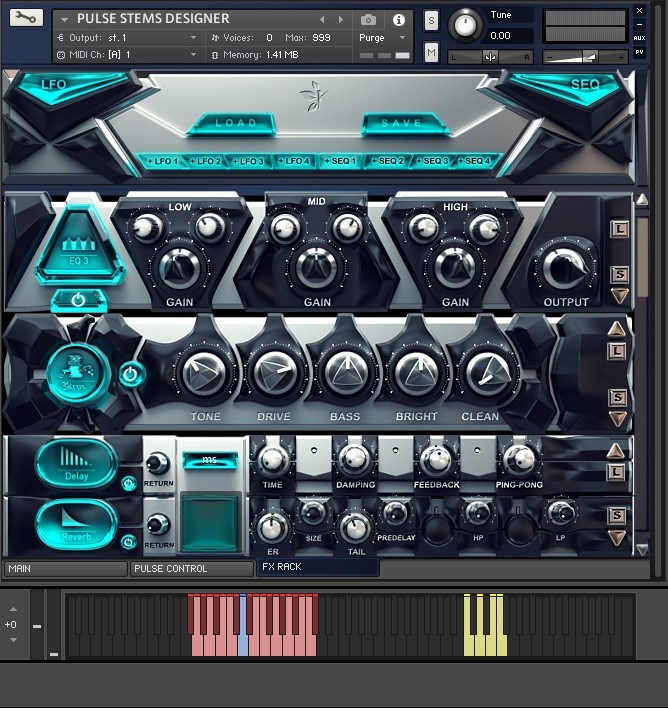 Accessible from the main GUI, most patches also come with each a Modulation and Motion tab. Both panels enable you to add variation and interest to your samples. While the Motion panel lets you animate your sounds by the use of a step sequencer, gate and filter, the Modulation panel adds two distinct LFOs to your arsenal. Those LFOs can modulate the volume and panning of your sounds using a collection of standard waveforms like sine, triangle, sawtooth and rectangle. Both of these panels allow for a great amount of customization options and are really worth having a look (or listen, rather). 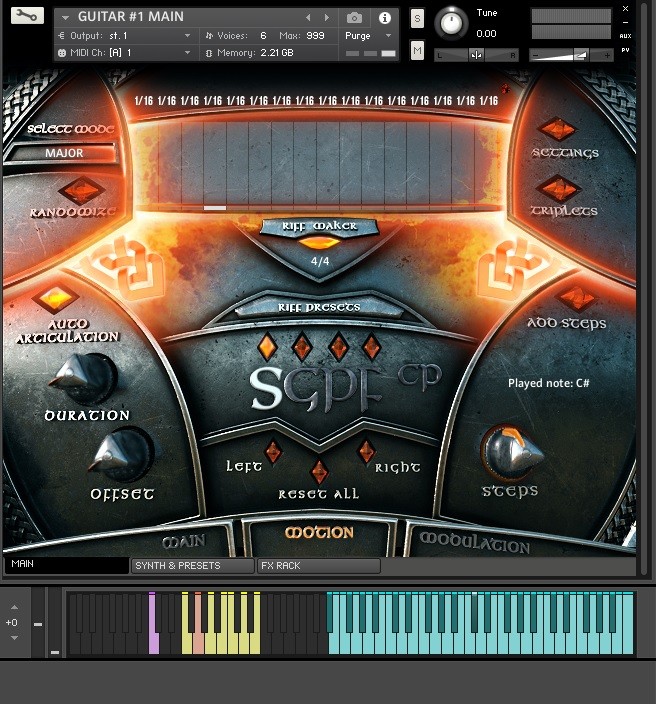 New to the Keepforest products are several so-called “designer” patches. What they got in common is a special sequencer panel that is accessible by clicking on the patch’s Motion tab. Similar to a drum sequencer, you can arm up to 10 slots with samples of a certain category and program a rhythmic sequence for each individual one. By pressing the respective keys on your controller, you can play up to 4 different, completely customizable patterns. Also, you’re able to randomize the sample selection, programmed sequences and even the time divisions either globally or for each layer. While controlling these designer patches does definitely require some learning, once you know how it works, you can generate unique synth pulses, string ostinati and even drum grooves (Vikings Expansion) in literally no time. 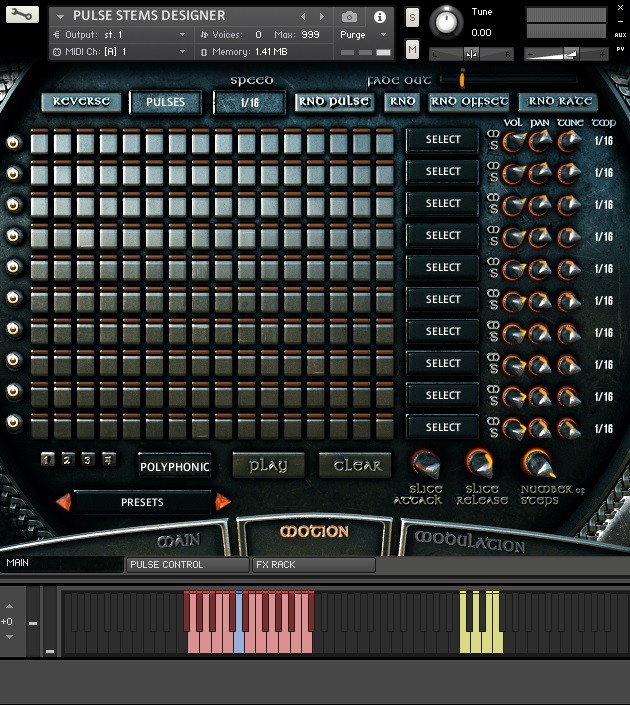 In addition to the huge pool of sound design elements and pulses/loops found in the main library, Vikings Expansion: Metal Cinematic Toolkit is mostly about a collection of metal band-related and cinematic instruments. These include various electric guitar sounds, riffs and effects, electric bass guitars and drum kits. In addition, you get a selection of powerful, aggressive synth samples and pulses.

Let’s start with the guitars. In the toolkit, there are both 3 electric guitars and 3 electric bass guitars although I think these are rather two instruments processed through different processing chains. Either way, depending on the velocity of your playing, you trigger different articulations like sustains and pinch harmonics for the guitars or sustains and mutes for the basses. A really useful feature is the “Synth & Presets” tab at the bottom of the interface, which allows you to layer your base guitar sound with up to 3 additional patches from the synth folder. This enables you to create absolutely massive sounding monster patches that you can save and load as you wish. Keepforest also provides you with a variety of pre-designed presets for starters.

Worth pointing out is the expansion’s so-called Metal Pulses folder which provides you with a large collection of organic, synth and hybrid patches inspired by Mick Gordon’s amazingly brutal signature soundtrack to the video game DOOM.

Each of the 30 “Riffs” patches of Vikings’ expansion pack contains a combination of matched metal guitar, bass and drum loops which can either be played back altogether or triggered in separate stems by using the respective keyswitches. While the concept isn’t entirely new, this stem-based loop engine allows you to quickly come up with a solid foundation for a metal-infused, cinematic track.

THE SOUND OF KEEPFOREST’S VIKING BUNDLE

Starting with the sound design elements portion of the library, Keepforest again managed to come up with fresh, cutting-edge trailer sound effects that can be used right out of the box. The diversity is huge and will keep trailer music composers busy for quite some time. Apart from the great sounding “standard” effects, I particularly liked the powerful fills and punch fills as well as those gritty cello loops which allow for an awesome rhythmic momentum. As the name implies, a good deal of the library is toned towards a dark and medieval sound, which explains the heavy use of metals, swords, organic sources and even processed war horns – a fresh approach to the more sci-fi-oriented trailer SFX libraries on the market.

Vikings’ Pulse Designer and other synth loops are a great-sounding addition to the effects and can give you a head start when creating your next trailer cue. Keepforest did a very good job at blending digital synth sounds with organic source recordings.

While the expansion covers a slightly different musical area, it’s absolutely useful nonetheless and chimes in well with the main product. The selection of guitars and basses sound truly powerful and can be used both for ravaging rhythms or soaring melody lines. The metal-oriented drum sounds cut through nicely and go well together with the guitars and basses. Some of my favorite sounds are in the Metal Pulses folder as well as in the Synth patches which – to my relief – finally got a multi-sample treatment.

Like Keepforest’s previous products Evolution: Dragon and Atlantica, the Vikings Bundle is a real treasure trove of modern trailer sound design with a strong medieval touch. Apart from the countless state-of-the-art sound effects, Vikings delivers a remarkable selection of hybrid pulses and loops which can all be used as great cue-starters. The instrumental range of the Vikings expansion only comes with basic articulation but sounds convincing nonetheless. While you probably won’t create a full metal band-style arrangement with them alone, they can provide a whole new tonal layer when worked into an epic orchestral arrangement. Apart from a few quirks and bugs across the patches, Keepforest came up with some very interesting concepts like the Pulse Designer, whose randomization features provide you with infinite rhythmic options.

If you’re looking for a comprehensive and versatile collection of cutting edge trailer sound design and instruments, the Vikings Bundle should absolutely quench your thirst – especially now that it’s one this massive 66% off deal courtesy of Audio Plugin Deals.

Keepforest’s Viking Bundle consisting of the two libraries Vikings: Cinematic Hybrid Punk Folk and Vikings Expansion: Metal Cinematic Toolkit is on a two-week sale at Audio Plugin Deals where it is available for $119 until June 28th. Alternatively, you can purchase the bundle directly from the developer’s website for $348.

Read an exclusive interview with co-founder of Keepforest Evgeny Emelyanov.